Posted on February 24, 2011 by portiabridget 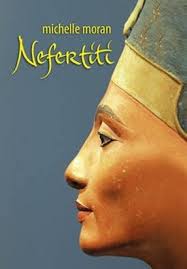 I got this book in the digital form courtesy of my friend Kasiul – thanks a lot!

The Eighteenth Dynasty, ancient Egypt. Nefertiti and Mutnodjmet (Mutny), two daughters of a powerful Egyptian vizier, grew up in a rural sleepy town. All this comes to a sudden halt when Nefertiti, aged just 15, is chosen to be Chief Wife of the young, hot blooded heir apparent to the Egyptian throne – Amunhotep the Younger. The prince has an obsession for Aten, a minor Egyptian god representing the Sun disc, and he hates priests of Amon, as, in his opinion, they wield too much power and are too rich. Nefertiti was chosen by her father and her aunt, the old Pharaoh’s wife, just because they believe she would be able to reign in Amunhotep and temper his hand.

Akhenaten worshipping the Aten with his family via Wikipedia

The prince has already been known for being power-hungry and ruthless. In 1351 B.C., he allegedly murdered his older brother who had had a bad chariot accident; that’s how he became next in line to Egypt’s throne. Now he’s 17, and he already has a wife, but Kiya’s blood is not royal, and she is hardly as bewitching as Nefertiti. Things get tense when Kiya gives birth to a son and the popular Nefertiti has only daughters. When the old Pharaoh dies in mysterious circumstances the new Pharaoh decides to force Egyptians to change their old religion and worship only Aten. He even changes his name to Akhenaten. He also decides to build a new city for himself and his Chief Wife. He seems to be deaf to the pleas of his generals –  Hetits have been attacking Egyptian borders and the king is wasting money on useless statues and temples.

Meanwhile, Mutny – now being Nefertiti’s handmaiden, closest friend and the best confidante – secretly longs for a family of her own. Nefertiti and her father don’t even think of allowing her to do so. As her sister rises higher and higher, Mutny feels more and more trapped in the court full of dark intrigues and dirty politics. She falls in love with a young general but the Pharaoh doesn’t like soldiers and doesn’t trust them so she can’t marry him. Finally, a tragedy occurs and it forces Mutny to claim her independence and start her own life on her own terms. Just in time – as the royal family is making one mistake after another a revolt against them and their new god is brewing. Not to mention the plague.

Mutnodjmet is a very nice character – the real highlight of the novel. Her relationship with Nefertiti is beautifully depicted. There is a scene where they are both praying to the Hippopotamus goddess of fertility but they just can’t seem to stop their sisterly bickering long enough to get through the prayers – it was very funny and real. I don’t know if the author really intended the scene to be humorous but I found it charming and well-written. Unfortunately, overall it was one of few good scenes.

Writing a historical novel set in a such distant period is always a risk. In most cases such a novel will contain minor (and sometimes major) distortions. The Eighteenth Dynasty, especially those years which were dominated by the “heretic” king Akhenaten and his fascinating queen, Nefertiti, is an enigmatic era in Ancient Egyptian history, filled with speculations, theories and questions that will probably never be answered by us. If your fictional narration is supposed to work you must try to present it in a believable way finding clever explanations to some of these questions. I’m afraid Ms Moran failed to come up with good theories and her only saving grace is the fact that it was her debut novel and she chose a difficult topic (but hey, who made her to do so?).

Most of the book reads as if it was written by a student. The dialogue is simplistic, main characters, especially the young Pharaoh Akhenaten (presented as a one-note shrill and over-ambitious lunatic) were annoying. The plot was hardly better – especially the climax seemed to me rather ridiculous. How anyone who has done even the slightest research into the times of the Pharaohs, (as Moran is said having done) would expect a reader to believe that the king of Egypt could be quarantined in his own palace until he dies? The Pharaoh was a living god and could not be touched, let alone be left to die in some sealed up room while everyone just looked on and waited. The death of his beloved Nefertiti was also rather abrupt and unbelievable – it looked as if the authoress has suddenly run out of time and, in order to tuck away all the odds and ends, grabbed the first idea that came to her mind. Not a very brilliant idea.

Nefertiti, presented as a ruler (with a crown on her head) is pouring wine to her husband via Wikipedia

Also the authoress didn’t explain well why it was necessary for Akhenaten to marry Nefertiti at all. Well, let me straighten it up – in order to be crowned as the Pharaoh the heir apparent had to marry one of royal blood princesses – that’s why different princes often married their sisters or half-sisters, nieces, aunts and even daughters. Committing a horrible incest, I know, but keep in mind that these guys were thought to be living gods; they followed different laws and only the royal female bloodline could provide them with the crown. Some Egyptologists even claim that this custom was clearly the remnant of  matriarchal society. That’s why Kiya, even being the mother of a royal prince or two, couldn’t have been the Chief Wife (let alone a woman-pharaoh). On the other hand Nefertiti qualified not because she was daughter of a Mittian princess (as it was stressed out in the book several times) but mainly because her aunt was the Queen of Egypt so she belonged to the royal bloodline and apparently Akhenaton had no sisters or other female relatives closer than her. That’s why the fact that Nefertiti from the novel is so anxious to have a son is beyond credibility – it is not an European queen, her daughters were more than enough as anybody who wanted the double crown of Egypt would have to marry one of them anyway.

But the biggest leap of logic this book in my opinion takes is to blame the downfall of Akhenaten’s city, Amarna, and his new religion on the Black Plague. I truly did a double take reading this. Now it’s not impossible that the plague existed back then, but this is the first time I’ve heard of it. Most Egyptologists assume that the unpopular Akehnaten was overthrown by a public revolt, which seems the most likely theory to me.

Fortunately this book came free to me via one of my Internet friends. It is perhaps a decent read as far as a romance goes, but if you know anything at all about Egyptology steer clear of it – IMHO it is a total waste of papyrus. Isn’t she lovely? Image via Wikipedia

This entry was posted in book review and tagged Michelle Moran. Bookmark the permalink.