Posted on February 26, 2011 by portiabridget 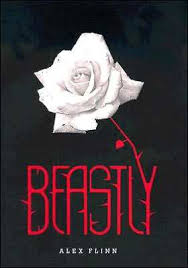 A modern retelling of the famous Beauty and the Beast fairy tale.

New York City. Rich, privileged and proud, high school student Kyle Kingsbury leads a life of an exceptionally handsome jerk. It is a very successful life. He knows he can get away with virtually anything – his good looks and his father’s money are unstoppable. One day, however, Kyle goes too far – he decides to humiliate a mysterious girl at the school dance. Just because he can. Ok, maybe also because the girl had a cheek to be different than the rest of his posh friends – dressed in black clothes, fat and ugly. Oh, and also because doing so he would score some points with his nasty girlfriend.

The girl turns out to be a witch who casts a spell on Kyle, transforming him into a beast – somebody not only ugly but also dangerous. The only way for Kyle to break the curse is to find true love who will look past his appearance and kiss him returning his feelings. As a kind of favour Kyle is given 2 years to do so. If he fails he will remain the Beast till his death.

The boy and his father, armed with a bunch of credit cards, go on a long and futile pilgrimage from one doctor to the other. Finally Kyle’s father gives up on his son – he sends him to an old, empty house in Brooklyn with a maid, a blind tutor and a broadband Internet connection so he doesn’t offend the eyes of his colleagues and friends. Will the Beast change his ugly, selfish character ? Will he find a girl wise enough to love him?

It is a book with a message which seems to be totally forgotten in most of YA novels; the message which says loud and clearly – looks are not everything. In fact looks will change. For sure.

The narration only explores the side of “the Beast,” which I found a nice turn – in the fairy tale we knew only the story of the Beauty. The author does a good job when it comes to the main character – Kyle is a believable teen from today’s world. Also we get to see why and how “the Beast” is able to change his horrible ways. It’s not just all the sudden he’s a changed man, but we see that development. We go from hating Kyle (or at least laughing at him) to rooting for him.Will (the blind tutor) and Magda (the maid) are fantastic guides for Kylie that show him people can be kind even when they do not have too.

There are moments of genuine humor in the novel. I really enjoyed the chat room moderated by no other than a certain “Mr. Anderson” (almost Andersen, right?) and featuring such fairy tale creatures as a princely Frog who is waiting for a kiss of deliverance, a Snow White who hates dwarves (sic!), a SilentMaid who is, in fact, a siren deeply in love with a sailor she saved one day and so on. I thought this was a really creative, innovative touch, and it made me smile to imagine these fairy tale characters tapping the keyboard of a computer, chatting with one another about their problems.

Finally the gardening classes as well as references to classic novels like The Phantom of the Opera, Les Miserables and The Hunchback of Notre Dame really endeared this book to me. The cover is very nice too – I love roses!

If you were such an old acid-dripping hag like me you would say the same (but please, don’t do such a thing – I hate competition): the ending was oh-so-HEA-predictable and saccharine sweet; it almost spoiled the whole novel for me. One or two refreshing turns and twists would make the reading experience definitely more enjoyable. The Beast yelling the name of the Beauty standing in an open window? Should I switch the TV on?

I also didn’t like Lindy, the sweet protagonist bound to save our beastly prince. In my opinion her character lacked some depth  rather badly. To tell the truth there were moments when I wished Magda, working as a  maid and cook for Kyle, was actually his one true love. Lindy did very little to win me over – she read “Jane Eyre” and Shakespeare sonnets, she was poor but intelligent and very hard-working ( rolling my eyes), she lived with a horrible dad (a yawn) who would gladly sell her for a bag of dope without much haggling (anybody wants some tea?). Being a complete hag I prefer ass-kicking heroines who know what they want and grab it even if it is illegal (or maybe especially when it is illegal).

Finally Mr. Anderson was sorely missed when I finished – the author didn’t explain what happened to him and his Unexpected Changes chat group. Can I join? I live alone in a very high tower in the middle of a forest and I never go out; the strange thing is that my hair has started to grow like mad recently – several meters a day…

YA fans and those who like re-telling of fairy tales and HEA should be overjoyed- it was a light, breezy read, charming despite some weaknesses. As I’ve always liked fairy tales I think I’ll be reading more from this author.

This entry was posted in book review and tagged Alex Flinn. Bookmark the permalink.