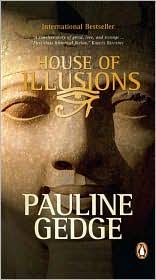 Warning
As it is the sequel of House of Dreams, reviewed by me not so long ago, the synopsis contains spoilers, especially concerning the first part’s ending.

The narration picks up 16 years after the catastrophic coup which almost cost Thu her life. She was lucky to be banished to her home village of Aswat, the place she had been so eager to escape. Now she lives in a hut next to the local temple of Wepwawep, a minor war god and also her personal totem. She serves the priests and cleans the temple, reduced to the lowest of low, a menial worker nobody wants to talk with. Thu is not a woman who would get depressed and reconcile with her fate, though. She thinks she stands a chance, however flimsy, of being pardonned. She must reach the old, ailing Pharaoh Ramses III and present her side of the story – everything she has personally written on papyrus scraps stolen from the temple. In order to do so she tires to get one of royal Heralds who visit the village from time to time to take her diary (not revealing its content) to the court. So far nobody has been foolish enough or sympathetic enough to agree. Finally she gets her chance.

Kamen, a young, sixteen-year-old soldier and the adopted son of a merchant, now on his way back from Nubia, spends the night in Aswat and is, like his predecessors, accosted by Thu. Of course she asks him to deliver an intricately bound package to the pharaoh. Kamen’s companions dismiss the woman as mad, but he himself, impressed by her elegant accent and behaviour, agrees to take it. Back in the capital, he hands it over to his commanding general Paiis, and when Paiis realizes what the package contains he and his former co-conspirators decide to act quickly. Kamen is commanded to return to Aswat, allegedly to arrest and bring the woman to the city. Surprisingly he is accompanied by a silent Libu mercenary who happens to be a hired assassin. In Aswat, Kamen and Thu narrowly escape death. Thu decides to return to Pi-Ramses and seek a hearing before the Pharaoh on her own. Although Kamen is determined to help her it will be a dangerous enterprise, full of sudden twists, turns and intrigues.

This part, unlike the first one, has three narrators: Kamen, Kaha the scribe and Thu herself. I liked such a way of narrating better as we can see the same events from more than one perspective. The narration remains fast-paced, full of twists and turns but some of them were rather predictable. Gedge makes daily life in Egypt come alive – I enjoyed it as much as in the first novel.

Thu is still a tremendous character, full of zest for life and stubbornness despite her miserable condition. Although she remains a double murderess we see that she has changed; it is especially visible in the scene when Thu is asked by her former harem friend to prepare a poison and help her commit suicide. I liked that new incarnation of her a lot.

In the first book, there was some plausibility in the story but in the sequel there was little left. In fact it is more a fairy tale than historical fiction.

The authoress decided to end the book with truly an unbelievable HEA, something which can be accepted only by hard-core Harlequin fans. Perhaps it was supposed to be sweet and romantic but I found it unbelievable. Thu was simply too successful in getting her revenge. I couldn’t believe for instance that, after letting her stay 17 years in exile, the old, bedridden Ramses not only remembered her and her coup so well but also took such an uncommon interest in compensating her every loss. If he loved her so much why he waited so long?

Finally I missed Hui and regretted the fact that we saw so little of him – after all, next to Thu, he was the most complex and the most interesting character of the first part. Here his role was limited – he seemed only a pale shadow of his former self. New characters, introduced in this part, couldn’t equal him in any way.

It’s still a good book, and I enjoyed reading it despite the cheesy ending but not as much as the first part. Unfortunately it confirms the rule that sequels are usually worse. This entry was posted in book review, historical and tagged Pauline Gedge. Bookmark the permalink.

12 Responses to Review: House of Illusions by Pauline Gedge