The third installment of my Summer Chicklit Reviews and things already are becoming a bit darker : Hard Bitten (Chicagoland Vampires 04) by Chloe Neill is definitely not all sunshine and sweetness. Well, it is never so when vampires in leather pants, wielding katanas, are involved. As the opportunity presented itself I decided to check whether Merit can go any better. Here are the results. 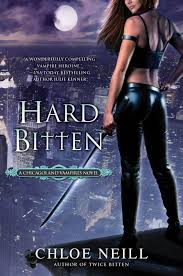 Caroline Merit, aka Merit the Cadogan House vampire and Sentinel, faces another crisis connected with her nemesis, Celina Desaulniers or Marie Collette Navarre. This time her house is blamed for every vampire-related disturbance in the beautiful but windy city of Chicago. It’s clear that somebody wants to create these disturbances only too often – vampires are secretly given a certain drug, white pills with a V pressed in them, and then they are invited to raves with humans. The drug makes them very volatile and aggressive- small wonder most of these raves end up in bloodshed and the help of the police is required. The problem is that more and more humans are rallying against supernaturals and especially against vampires – some of them picket the Cadogan House day and night with protest signs letting the vamps know that they are not welcome (to say the least of it).

Merit’s private life has improved but just slightly so. Ethan does what he can to make her trust him again but Merit is very wary and very bitter, unable to forget the way he backed out of a serious relationship last time (if you didn’t read the previous parts then fyi: he behaved like a total ass, showing that he cares more about politics and power than about her). Some new facts will emerge concerning Merit’s turning into a vampire without her consent and they will leave her dear Liege in even worse light. Not to mention the fact that Mayor Tate, a classic politician, practically blackmails Ethan with an arrest warrant from the CPD if he can’t keep vampires in line, knowing fully well that some vampires simply can’t be kept in line no matter what you do. As the book ends with a cliffhanger of a rather shocking kind I decided to include a spoiler for those who, like me, don’t mind being informed about such occurrences.


Spoiler section plus some of my rabid theories – highlight to read at your own risk.


The final is very dramatic, almost Shakespearean (I think here about those classic Hamlet performances with plenty of rapiers or foils swinging around): Celina all of a sudden stakes Ethan who shields Merit with his own well-muscled body, and Merit stakes Celina because now she lost any chance to reconcile with her beloved ex-lover (and she was definitely on her way to do so). With the death of Ethan the Cadogan House faces a bleak future – now it will be governed by a Receiver from the Greenwich Presidium, the body responsible for vampires around the world. I bet, though, that the new Receiver might be just the right person for some of the Cadogan vampires to make a new start. It’s pure speculation but I suppose Merit deserves to have a top-gun guy by her side and she can get him now, when Ethan is no longer the most serious obstacle. I never liked him but in this part he improved beyond belief – small wonder he had to die. Never believe a man when he says he will improve. ;p He is most probably lying and if he isn’t then he won’t live long anyway. The sheer effort might do him in.

The book was action-packed as I like and better paced than previous parts. The political intrigue was presented in a sensible way – neat, slick and horrible. I had absolutely no idea who was really pulling the strings. I also never saw the final showdown coming.

Merit is the main character, but unlike almost every other female protagonist in this genre, she has meaningful, strong relationships with other women. I really start to enjoy that aspect of the series. I think Merit is growing on me, maybe partially because she and Ethan were definitely behaving in a more mature way. Maybe her emotions haven’t been described very clearly but at least there was some ‘adult’ reasoning behind her actions.

Finally the cliffhanger…no matter whether you liked it or not you must admit the author was rather brave to end her fourth book the way it was ended. The move might kill the series in the long term. I never was a fan of a certain vampire and, reading so many emotional, even downright angry opinions, directed towards Ms. Neil, I was surprised a bit. Although I understand I cannot relate. Not really. Of course I can’t assess this plot development properly right now because I don’t know what will happen next but in my view it was the equivalent of killing off that old, wise, white-bearded protector of the main lead so he/she can progress and grow up. A stuff which you can come across in every fantasy book and/or movie. I hope for the best and I praise the author for risking the fact that some readers, so drawn to the character in question, might not want to read the series any longer. You’ve got to be talented to kill off a popular hero, one of the main characters to boot, and redeem yourself as a writer in the next part. Just think about the pressure to write the next part so well to woo at least some of the fans back. My best wishes Ms. Neill (but I don’t envy you)!

The baddie, Celina…in my humble opinion she should have been presented in a different, far more exposed way. I mean she was one of the crucial characters and I found her rather underdeveloped. I like well fleshed-out baddies, with internal turmoil and all that jazz. Apart from that vampires in this series are supposed to be heavily political and tactical creatures. They’re supposed to think two steps ahead, have a back up plan and be able to defeat their enemies without doing anything more than playing out their hand to its inevitable conclusion and here we don’t see any planning – we are shown a woman who just snaps at everybody or features in some blurry photos as a shadowy figure meeting with another shadowy figure– in other words we are left without one single juicier scene. Other characters have to fill in that void, discussing Celina’s motivations and aims. Lame.

What’s more…some plot lines were left hanging but hey, it’s not the ending of the series so not really a fault unless…the author forgets about them further on. We’ll see.

Finally the narration occasionally turned into a journal-like account of Merit’s most trivial actions like “I showered, I combed my long hair, I dressed, I went to visit a friend, I had an ice-cream or a deep-fry in such and such restaurant on the corner…” but it wasn’t as frequent and annoying as in the previous parts. However, I would like to read even less of it.

A book definitely more emotional than a standard position of this genre – no HEA and no fluffy sense of physical well-being guaranteed. It is getting better but do you feel the same? :p I am inclined to give the author one more chance– I am very curious what will she do in the next part to atone for her ‘sin’. In other words: I will be reading book 5 but whether I read book 6 is a completely different question.

This entry was posted in book review and tagged Chloe Neill. Bookmark the permalink.