I tried to resist, I really did, but the resistance was futile. I knew I had to read it and I’ve finally done it. Here is my review and beware – apart from Pride and Prejudice also zombies are coming! 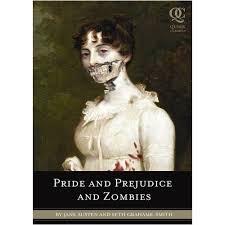 Synopsis and what I liked:

I shortened this section in order not to bore you with repeating the story plenty of people know by heart and most of other people have heard something about. The book is a paranormal version of P and P – there’s Lizzy and her family, the Bennets, but here they are China-schooled martial art warriors (apart from Mrs. Bennet of course) – ninja or better. What can be done – the family lives in an age when they must be ever vigilant if the girls are to survive until marriage and beyond because England is swarming with zombies. Elizabeth Bennet becomes an especially talented fighter, and is renowned for the ease with which she can fend off an entire horde of Unmentionables, slicing and dicing with the best of them. Their beloved Hertfordshire is horribly infected and they do what they can to protect themselves and the rest of the population.

The zombies provide an entertaining backdrop without outshining the main story, which remains the developing relationship between Elizabeth and Mr. Darcy, another magnificent warrior. What’s more? Lydia elopes with Wickham, Jane and Bingley fancy each other, Charlotte catches Mr. Collins but for slightly different reasons than in the original version. Let me only say – zombies can change a lot. The characters fight, duel and maim while still keeping perfect manners. Lizzy beheads Lydia when the girl annoys her (the head reattaches itself, don’t worry). Lizzy rejects Darcy’s frist proposal kicking the hell out of him. Wickham ends up lamed for life. Vomit plays an important role in the whole book – these scenes were disgustingly funny at first. Finally “A Reader’s Discussion Guide” was smart, witty, and did repair my opinion of the grossness of the book — just a little.

The cover is great, though. Scary but funny and great.

None, with those horrible “dreadfuls” and all that barfing going on…

First, in my opinion Seth allowed Jane Austen to do the bulk of the writing (85% of the text is still hers). I think he could have changed more and make the whole story quirkier and better. He could even have  avoided mixing so many Asiatic culture elements – I suppose a steampunk P and P would work as well.

Second, the idea to turn Wickham into a diapered mess of a man, who must be constantly tended after wetting his bed lacked some refinement. This plot development itself tells me that Mr. Grahame-Smith rewrote the book more for teenage boys and girls than adult men and women. Personally I would put Wickham in charge of a large necropolis and let the zombies deal with him (or him deal with zombies as he was also a trained warrior after all). Satisfaction guaranteed.

Finally, after a while all that puking became irritating. Mrs. Bennet was the biggest offender but in this book at some point almost every character takes out discretely their handkerchief and empty their stomach for a reason or two. Zombies eating brains is gross, but when one has been surrounded by the Unmentionables for fifty years, it is unlikely that one will share our sense of decorum. But then came the marriage time and I didn’t complain anymore.

It is still positive, despite some childish scenes aimed solely at grossing the reader out and/or make them laugh. If you found Pride and Prejudice an agreeable read and/or you are a zombie move aficionado (one somehow doesn’t exclude the other), I’d encourage you to give this a try. I think Jane Austen would generally approve and she would earn a lot selling her copyrights! I don’t doubt she would like to change the overtone a bit, though.

Now some quotes to give you a better idea what you could be dealing with if you decide to read the book:

“It is a truth universally acknowledged that a zombie in possession of brains will be in want of more brains. Never was this truth more plain than during the recent attacks at Netherfield Park, in which a household of eighteen was slaughtered and consumed by a horde of the living dead. ”


“Elizabeth thought she detected the slightest smile on his face. She watched as Darcy drew his blade and cut down the two zombies with savage yet dignified movements. He then made quick work of beheading the slaughtered staff, upon which Mr. Bingley politely vomited into his hands. There was no denying Darcy’s talents as a warrior.”


“Your balls, Mr. Darcy?” He reached out and closed her hand around them and offered, “They belong to you Miss Bennet.” Upon this their colour changed, and they were forced to look away from one another, lest they laugh.” (of course they dealt with musket balls if anybody is asking).

This entry was posted in book review and tagged Jane Austen, Seth Grahame-Smith. Bookmark the permalink.

12 Responses to Summer review: Pride and Prejudice and Zombies by Jane Austen and Seth Grahame- Smith