Because of her previous troubles Corine finds herself caught in the war between two powerful Latino druglords – Escobar and Montoya. A very dangerous position for her and everybody close to her heart. What’s more she must pay off a certain demon called Maury who saved her life in Kilmer. Not enough trouble? The little pawnshop, her pride and her only source of a stable income, has been blown up by a bomb planted by one of Montoya’s henchmen, killing an innocent man in the process. Plenty of grief, I know. Good thing is that Corine can always count on her friends, even those she knows very little about – Kel Ferguson saves her life right at the beginning of the novel and then assists her in more than one way. Shannon, Jesse, Chuch and Eva never fail to help her when she needs it the most. Apart from that plenty of things are explained in this one – Kel’s real identity, Corine’s dark secrets from her past and why she never felt exactly worth of Chance’s attention and company.

Yes, this time Corine goes all the way with one of her suitors (I won’t reveal who), getting her short HFN. Then she makes some serious decisions concerning her private life. I wasn’t surprised by her choice but I couldn’t help smiling at the cunning way Ms Aguirre plays with her readers. No mercy again. Oh and there is one rather disturbing scene of attempted rape. Well, if you deal with demons…

· The narration was chock-full with action – not even one boring moment. I love it!

· The glimpses of Corine’s sad past really made plenty of things we’d been told previously more logical, understandable and real – nice touch!

· Kel has proven to be unique – I won’t say more in order not to spoil but somehow I tolerated his supernatural identity far better than usually.

· Corine becomes really though in this part and the more though she is the more compelling I find her.

· I wholeheartedly share the authoress’s take on bigger monkeys, dolls and clowns.

· The ending, although leaving plenty of leeway, was slickly done. No memories, no pain but is oblivion pernament? Somehow I don’t think so.

· Corine’s fight with a certain Knight of Hell was a bit…over the top? Too easy to be true? Unrealistic? I know, I know it’s a fantasy book but still…

· Im general don’t like rape or attempted rape scenes. Perhaps this one was needed but it made me squirm.

· Chihuahua learned to write using Scrabbles tiles. Urgh. A veterinarian should examine it thoroughly. It is most certainly not a dog.

Finally the cover…meh and meh again!

An almost-perfect summer read. I am looking forward to the next part, Devil’s Punch. Below you can see how  Shady Lady drink might look like: 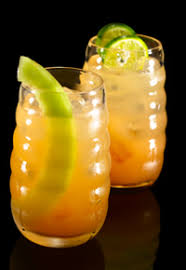