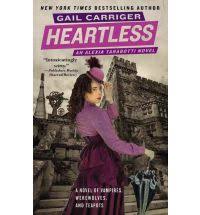 Synopsis:
Alexia lady Maccon, nee Tarabotti, might be in her last months of  pregnancy but never indolent, inactive or bored. With a werewolf Alfa male for a husband and a single vampire extraordinaire for a best friend you can practically never have one  minute of peace. As if anybody would want one.

An unknown ghost with short concentration span has just informed Alexia that somebody is plotting a regicide and certain vampires are still hell-bent on killing her unborn infant-inconvenience. To protect her unborn child she is going to do something unthinkable – let it be adopted even before it is born. And the happy foster parent will be… well, guess. 🙂

One problem solved; now Alexia, still employed by Queen Victoria as a mujah, must do her utmost to prevent any regicide, especially that most likely a supernatural being is involved – more precisely a werewolf. The uncomfortable investigation will make her discover a lot about her husband’s and her late father’s past, always a dangerous thing when there are so many secrets to unveil…and so many sensitive toes to tread on. Prepare yourself for plenty of tea, treacle tart and some murderous teapots as well.

What I liked:
I don’t try to conceal the fact that I am Gail Carriger’s fan. Why I like her novels so much? Of course I might tell you that this book, like the previous ones, had very good plot with interesting twists and turns, a well-paced  narration which flows nicely, a strong, likeable heroine, a bevy of great secondary characters and so on. It would be all true but it wouldn’t make the whole series unique. So, what makes The Parasol Protectorate books really great and distinctly different from many other paranormal series? I tried to pinpoint some of the features in the list below:
Quite a list, isn’t it? Would you wish for anything more? Well, perhaps you would but it would be also rather foolish…;)
What I didn’t like:
I do admit that Madame Lefoux disappointed me a bit in this part with her mad scheme (a sensible woman and a scientist should have known better than resort to brute force even in very dramatic circumstances) and zombie porcupines never seemed half as funny as mechanical ladybirds, presented in part three but perhaps it’s only the old grumpy me.
Final verdict:
A lovely series with great steampunk accents which gets better and better. Definitely worth discovering and reading. What else could I say…I am looking forward to the next part – I’ve already pre-ordered it!

A mechanical spider via Wikipedia – I want one!