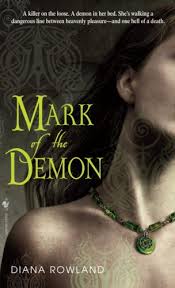 Kara Gillian a recently promoted homicide detective, in her free time summons demons. Her job gives her a sense of belonging, her hobby – an adrenaline rush sufficiently thrilling to make her forget some dark experiences from the past, like a rape at the age of eleven or a period of drug abuse or the premature death of her parents. Well, who said that demons are safer than drugs, though? Certainly not Kara.

In her small Louisiana town called Beaulac strange murders have happened and the perpetrator, known only as the Symbol Man, has never been caught. Now it seems he or she returned to previous activities and soon enough horribly mutilated bodies with a strange symbol on them are found in different places. Kara, although a newbie detective, is given this case because she happens to be a resident expert. It is a blessing and a curse – she is given a chance to prove her value but she might lose her job if she fails to do so – every help is very welcome, even some occult knowledge about arcane procedures and runes.

Kara decides to summon a minor demon to help her with that difficult investigation but something goes wrong and a definitely more powerful being goes out of her portal – a demon Lord called Rhyzkhal. He is scorchingly hot (platinium blonde mane of hair, crystal blue eyes, muscled body, not unlike poor Rhaegar Tangaryen if you get the drift) a bit angry but instantly smitten by Kara. Our heroine of course knows that demons are highly mercenary beings, never giving anything for free but…will Rhyzkhal help her investigate? What will he ask in return? Or maybe there will be more useful help provided by a handsome FBI agent Ryan Kristoff, delegated to assist the local police?

Two sex scenes between the demonic Lord and Kara, hot and rather descriptive – pure lust, nothing more. I suppose that the in the next installment we will be shown Kara dealing with a demonic STD. ;p

Kara was a bit different that the rest of kick-ass heroines, usually inhabiting such books. She had darker side, a lot of flaws and she had her doubts – plenty of them.

Kara’s story is told in the first person, and is often vividly described. Apparently the author has worked in a morgue, so the autopsy scenes seem very unsparing and true to life but it added some grit which suited me just fine. Overall I suppose the author must have some law enforcement experience because the crime scene, forensic, and medical details in the book are spot-on.

The criminal mystery was good enough, despite the paranormal touch – I didn’t guess the perpetrator to the very end and when the identity was revealed, it was done with a proper psychological background.

Finally the book was rather readable – although not exactly short. I finished it in two evenings.

Demons shouldn’t ever be boring or mundane like us, weak-kneed mortals, and here, unofrtunately, they were. Rhyzkhal was portrayed as such a typical male – he saw a nice mortal summoner female and here we go, a sex scene is inevitable. Then he goes away, undoubtedly to brag to his demon friends about the new conquest, and returns to have some more…you could insert a werewolf here or a vampire or even a normal hot human and the result would be the same…really too predictable and a bit crass.

The police narrative I found a little bit unreal, especially when it concerns out heroine. Kara is just a detective, one from many others, but she behaves as if she worked on her own, operating in a very free-wheeling manner, keeping her own hours, rarely checking in at work, doing paperwork, or coordinating with her serial-killer-taskforce. Where is reality here?

We never get a clear picture of why summoners call demons other than that they can but I suppose it might be explained in other parts of the series. Oh, and there is a loophole concerning Rhyzkhal but it also might be somehow patched in other books so I will let it pass this time…

Finally the romantic thread…you do know that more often than not I have problems with romance? Well this book isn’t different. A short tryst of Kara and Rhyzkhal was purely carnal so to speak, not involving any higher emotions apart from raw lust but I didn’t feel any great chemistry between Kara and the FBI agent she was partnered with for the case either. Ryan Kristoff behaves very boyishly, then he apologizes like a sweet little child and then…nothing changes. Truly frustrating. I like paranormal novels where romance takes a backseat, but it still needs to pack a punch from time to time. Demanding, aren’t I?

It certainly wasn’t very bad but it wasn’t very good either…I recommend it but mostly to the fans of the genre. The storyline and characters have some great potential – the idea of a police officer who can summon demons to help her solve murders is quite original- that’s why I am willing to see where Rowland takes them next.