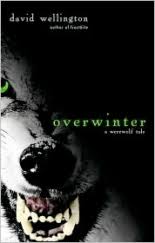 Powell and Cheyenne, a pair of werewolves from the first novel in this series, Frostbite, are trying to spend safely their first arctic winter still looking for a cure for their state. It happens somebody else is looking for them and that particular somebody means trouble big time. Her name is Lucie. She is a sadistic French werewolf girl who had bitten Powell some hundred years ago and now treats him as her husband. Having made a total mess of her latest Siberia hideout, she decided the ground under her dainty feet was too hot – she left for Cananda to find some backup. She joins her former lover and creation asking for Powell’s protection. And killing a bar full of innocent people on her way just because she felt like it. As you can imagine Chey and Powell are less than thrilled – the attention of the local authorities and law enforcement is the last thing they want. Especially that Chey starts having some very worrying symptoms – apparently her wolf is becoming stronger than her human nature but if she allows the wolf prevail she will end up insane. The time for finding a cure is becoming short indeed.

Lucie is closely followed by Varkanin, an elderly but still hale and hearty Russian hunter who had shot her back in Siberia and whose family she destroyed –  in retalliation she murdered all of his three adult daughters. Varkanin is very motivated to find Lucie and make her pay for her sadism. He is also a formidable opponent, with his specnaz training and a lot of colloidal silver inside his body. Additionally he is given substantial support from the side of Preston Holness, a shadowy figure working for the Canadian government. Holness specializes in unsavoury deals the government needs but officially would abhor like using prohibited land mines, depleted uranium bullets or killing off a bunch of werewolves just because they operate in an area rich in oil a big oil company is interested in.

Will Powell find a cure? Will Lucie let him stay with Chey? Will Varkanin get his revenge and the oil company – its drilling towers? As usual there will be no easy solutions and no easy answers.

It was a gutsy story – as beautiful but also as cruel as the Arctic itself. There are a lot of deaths at the end, some of them very painful although still logical. I truly couldn’t have thought of a better end; I also couldn’t have written anything more depressing. If Powell and Chey were handed a HEA (happily ever after), so a little prairie house and one evening at the bowling alley a week as they planned at one point, I would threw this book away; on the other hand the way the book (and the series) ends, made me rather sad. Love does conquer all, even lycanthropy, but sometimes the price is high indeed, so high that you wonder whether it was worth it…ok, before I get maudlin let me progress with the rest of likes.

I liked the mythological spirit of muskrat (Dzo), accompanied by that of a polar bear and a dire wolf better this time. Their role in the book was more precisely outlined, more important and far more understandable than in the first installment. I also liked how the character of Varkanin was presented – a former specnaz soldier, a cruel hunter but also a deeply-wounded individual who lived just for his revenge. Creepy but so very true. Similar things can be said about Lucie – she is very pretty, very sweet sadist who also, once upon a time, was hurt and wasn’t given any choice but to follow her fate. You feel sorry for her for 1/3 of the story and you hate her for the rest.

It is not really a flaw because this book was very good; However, it made me very sad. I think you should be warned – don’t read it when you have a spell of autumn blues (or any other kind of blues). The ending will hardly put you in a better mood. Of course it was all good, logical and understandable but still…prepare a lot of chocolate and maybe even a highball.


A very good, intelligent but definitely a very adult fantasy series with some violence and no easy issues. I recommend it but I am also aware that it might be not a pair of novels for everyone. If you crave for something to cheer you up and make you all warm and happy you might actually want to steer clear of it.