Posted on November 2, 2011 by portiabridget


Synopsis (with some inevitable spoilers concerning the first part, Wolfsangel):


This part is set up in times of Charles the Fat and more precisely, during the famous siege of Paris (886), which was attacked by several Viking armies. Count Eudes, the descendant of Robert the Strong who is ruling Paris, faces a very difficult problem. Either he surrenders his city, because the Vikings forces are clearly prevailing, or he gives his own sister, Aelis, to these filthy heathens.

If only a Viking king wanted to marry the girl it would be still more or less acceptable – after all a king is a king, even if he is a stinking pagan, and a Christian consort could convert her husband and his people in due time gaining universal recognition, maybe even a status of a saint. Rumour has it, though, that Aelis is to be killed – more precisely sacrificed to an unworthy false god called Odin. It is a horrible fate and one unacceptable for a noble woman and a sister of a leader of Christian Franks. On the other hand what is worse – condemning a whole city of people to death or slavery or condemning one girl? Troubled Eudes asks Jehan of St Germain, a blind, crippled monk declared a living saint, for advice.

However, soon enough the decision is taken from his hands in quite unpredictable manner. During a bold attack the Vikings enter the city and Aelis must flee for her life; following the instructions of a stranger who is supposedly a werewolf, she jumps into the Seine (as dirty as nowadays), gets lost in a forest, meets a greedy merchant called Leshii and disappears completely from her brother’s sight. Other forces are actively looking for her as well– an evil sorcerer Hugnin with his horrible but even more powerful sister Munin, a werewolf who saved her and that crippled monk, Jehan who was captured by Vikings and kept prisoner…after all even pagans understand that a living saint can be worth a lot of money both dead and alive. Aelis must head for the country of Rus near Ladoga where reigns Helgi, a prince who, allegedly, knows enough magic to save her. Will she manage to get there? Who will help her and why? What will she discover during her journey?

The sequel, like the first part, is a literary rendition of the cyclical myth of Fenrir, the wolf destined to kill Odin at Ragnorok and end the era of Norse deities for good. It also features the same set of main heroes. From almost the very beginning it becomes obvious that Aelis and Adisla (a peasant girl from the first part) are, more or less, the same person. Identifying Vali and Feileg, the twin brothers in love with her whose father is Loki himself, is not that easy. Of course both brothers were also given interesting parts but I won’t reveal their identities because it would be two major spoilers. Let me only say that their fates are closely intertwined, the idea was original and their identities –surprising. The author throws as many red herrings your way as it is only possible and he mostly succeeds in disorienting you, making this book different than Wolfsangel– no mean feat when the main characters are supposed to follow the same path for the second time.

Their path might be the same but their social role isn’t. I complained that in the first part Adisla seemed to me the weakest of the trio. Here the opposite is true – she is a really strong female lead who takes difficult decisions, can defend herself and is often the most aware of the course of action happening around her. Mainly because of Aelis I liked the second part better than the first, although it was grimmer – we get here definitely less sense of humour and those happy, cheerful ordinary life scenes are really few and far between.

Overall the characterization was really a strong point of this novel – each character develops as an individual, has their own flaws, and almost every one displays some degree of moral ambiguity – I loved that immensely. Even the nominal bad guys are not wholly bad. What’s more? I am happy to say that Loki reappears forwarding the action every time in a new direction but we see almost no witches (and good riddance to bad rubbish, I hated them).

Sometimes the narration was overwhelming because of the amount of atrocities, described; I felt like having a really bad nightmare, one after which you wake up tired and drawn but grateful it’s over. Be warned – cannibalism, killings, murders, torture scenes are thrown at you one after another until the very end. Yes, they are used in context with the rest of the story and often play important role in the progression of the narrative, everything being logical and explained in a believable way but if you are not in a mood for such entertainment better steer clear of this book.

At the end no HEA is waiting for you either, although some might quarrel that a prospect of living again after being killed can be counted as such. However, how much is such a prospect worth when you are entangled in the same vicious cycle of running for your life, being turned into a monster, killing and being killed, most of it happening against your own will and for unknown purpose? I hope the final part will end up in a more positive way for Vali, Adisla and Feileg, no matter how they will be called and what they will become.

Finally it is hardly a flaw but I am also not sure this one is a stand-alone novel. Not really. In my opinion you would miss too many good analogies and most of rune magic. I do recommend reading Wolfsangel first. For those who like reading a series out of order – don’t do it this time.

In my view, Fenrir lived up to the high expectations set by Wolfsangel. It is rare when it comes to sequels – the more I am pleased to admit it. The book still remains a rather violent mix of Norse magic and myths with some Christian elements added but if you are not put off by the high amount of violence you will enjoy it and you will, like me, wait for more. 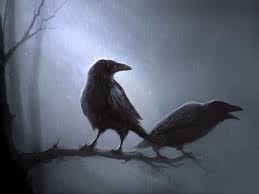 This entry was posted in book review, fantasy, historical and tagged M.D. Lachlan. Bookmark the permalink.