The masquerade – Venetian carnival and masks

Posted on February 2, 2012 by portiabridget 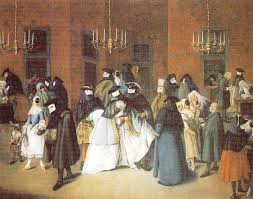 Carnival is a festival traditionally held in Catholic and, to a lesser extent, Eastern Orthodox societies. The word carnival most likely comes from the Latin carnem levare or carnemlevarium which means to take away or remove meat. Other scholars argue for the origin from the Roman name for the festival of the Navigium Isidis (ship of Isis), where the image of Isis was carried to the sea-shore to bless the start of the sailing season, accompanied by smaller boats and a parade of masks. No matter who is right, the carnival was officially a religious event at first but soon its character changed.

The Lent period of the Liturgical year Church calendar, being the six weeks directly before Easter, was marked by fasting and other pious or penitential practices. Traditionally during Lent no parties or other celebrations were held, and people refrained from eating rich foods, such as meat, dairy, fats and sugar. The forty days of Lent, recalling the Gospel accounts of the forty days that Jesus spent in the wilderness, serve to mark an annual time of turning. In the days before Lent, all rich food and drink had to be disposed of – so eaten up. The consumption of this, in a giant party that involved the whole community, is thought to be the origin of Carnival. Some carnival traditions undoubtedly date back to pre-Christian times. The ancient Roman festivals of Saturnalia and Bacchanalia may possibly have been absorbed into the Italian Carnival. The Saturnalia, in turn, may be based on the Greek Dionysia and Oriental festivals.

While medieval pageants and festivals were church-sanctioned celebrations, carnival was also a manifestation of medieval folk culture. Some of the best-known traditions are carnival parades and masquerade balls with the participants disguised and covered by masks. These were first recorded in medieval Italy and the carnival of Venice was for a long time the most famous carnival in Europe. There could be no carnival without a mask, though.

The first documented mention of the Carnival of Venice occurs in 1092 but the first mention of the wearing of carnival masks was made in 1268. The Venetian law makes noted of masked men who threw scented eggs at ladies during the carnival. The law prohibited this practice.

The main purpose of the Venetian mask in the early centuries was to hide and protect the identity of the mask-wearer in order to avoid discovery during indecent activities, but as the severe social rules of the Serenissima Venetian Republic were created, it gradually changed into a symbol of disobedience and freedom. The purpose of the mask was to act as a barrier to keep somebody’s identity unknown. The mask would permit the wearer to act more freely in cases where he or she wanted to interact with other members of the society outside the bounds of identity and everyday convention. It was useful for a variety of purposes, some of them illicit or criminal, others just personal, such as dates. Masks were mostly favored by the upper class so that they could go out freely and mingle without being recognized. Those who went out to act promiscuously, gamble, wanted to avoid creditors, or live a life of begging on the streets due to being impoverished by these creditors, strived to evade the scorned look.

Wearing a mask, however, was restricted to certain timing of the year due to new laws implemented in the 14th century by the Venetian Government in order to stop the moral decline of the Venetian people (it seems it is a recurring problem no matter what era). From the day after Christmas until Shrove Tuesday (marking the beginning and the end of the Venetian Carnevale), masks were allowed to be worn, but not during religious feasts. Along with these days, masks were worn during the two week of Ascension, as well as halfway through June and during official banquets and other celebrations of the Serenissima Republic. The laws stated that it was forbidden to masquerade at night, it was forbidden for men to enter convents dressed as women (and you can guess for what purpose), and it was forbidden for masqueraders to carry arms and enter churches.

In 1797, when Venice came under the reign of King of Austria, the practice of wearing masks during celebrations was declared forbidden. The masks were not used again until 1979 when a group of undergraduate students revitalized the custom of Venetian masks to earn money by selling them to tourists. Since then, Venetian masks have become the signature of Venice and an integral part of the modern Venetian Carnevale. They are often characterized by their ornate design, featuring bright colours such as gold or silver and the use of complex decorations in the baroque style.

The most common mask types

Bauta (sometimes referred as baùtta) is a mask which covers the whole face, with a stubborn chin line, no mouth, and lots of gilding. The mask has a square jaw line often pointed and tilted upwards to enable the wearer to talk, eat and drink easily without having to remove the mask thereby preserving their anonymity. The Bauta was often accompanied by a red cape and a tricorn hat. It was worn by men. In 18th century, the Bauta had become a standardized society mask and disguise regulated by the Venetian government. It was obligatory to wear it at certain political decision-making events when all citizens were required to act anonymously as peers. Only citizens had the right to use the Bauta. Its role was similar to the anonymizing processes invented to guarantee general, direct, free, equal and secret ballots in modern democracies. Today the Bauta and the Moretta styles are sometimes blended.

The Moretta mask is one of the most traditional designs of Venetian female masks. Originating in France it was quickly taken up by the fashion conscious Venetian women. It is a dark colored mask (hence the name, moretta meaning “a little black one”) depicting intrigue. The Moretta mask was oval in shape with no mouth opening, just eye holes. Traditionally the mask was worn with a veil so giving total anonymity to its wearer. Originally it was made of black velvet the features are expressionless. The mask was held in place by biting on a special button sewn on the inside of the mask using front teeth so rendering the wearer mute. This is why the Moretta mask is also called the Servetta Muta meaning mute maid servant.

The lack of verbal communication this mask imposed meant that Venetian women had to use their body language a lot. It encouraged coquettish behavior; the tilt of the head, the fluttering of eye lashes, the touch of a hand all became an intricate part of flirtation. Its expressionless face meant that the female wearer had to use her body much as a mime artist would today. When worn, the Moretta mask accentuated all the attributes that Venetians considered to be the height of desirability and femininity. In an era where women’s views were seen as unimportant and where the women were judged on their physical attributes alone the mask accentuated the soft feminine lines of the female face but made its wearer unable to speak, eat and/or drink. It really speaks volumes about the treatment of women in the Venetian society.

The Moretta mask was worn to gambling houses, for affairs and when visiting convents where vows of silence were observed. Its popularity was short lived as by 1760 it had disappeared.. Thankfully todays Moretta masks are designed with ribbon ties to secure it. They can be crafted from leather, cloth or paper mache. Most are still blank in either black or white as tradition dictates. The leather Moretta masks are probably the most comfortable, allowing the skin to breath and molding to the shape of the wearers face.

The Columbina (also known as Columbine and Columbino) is a half mask often highly decorated with gold, silver, crystals and feathers. It is held up to the face by a baton or tied with ribbon as with most other Venetian masks. The columbine was popularized by an early actress in the Commedia dell’arte of the same name. It is said it was designed for her because she, being a vain woman like many actresses, did not wish to have her beautiful face covered completely.

The Medico Della Peste with its long beak is one of the most bizarre and recognisable of the Venetian masks. The striking design has a macabre history originating from 17th century French physician Charles de Lorme who adopted the mask together with other sanitary precautions while treating plague victims. It is a full face mask, most often white, with curved eye holes and a hollow beak. The mask is covered with crystal discs to create a bespectacled effect.

Today, the masks are often more decorative. The doctors who followed de Lorme’s example wore the usual black hat and long black cloak as well as the mask, white gloves and a stick (to move patients without having to come into physical contact). They hoped these precautions would prevent them contracting the disease. Those who wear the plague doctor mask often also wear the associated clothing of the plague doctor. The popularity of the Medico della Peste among carnivale celebrants can be seen as a “memento mori” (remember about death). This mask is perhaps the most enigmatic and distinguishable of all Venetian masks. It is typically worn with a black hat and a cloak by men.

The classic larva, also called the volto mask, is mainly white. It covers the whole face but it often has individual facial features. It is worn with a tricorn and cloak. It is thought the word “larva” comes from the Latin meaning “mask” or “ghost”. Like the bauta, the shape of the mask allowed the wearer to breathe, drink, and speak easily without having to remove the mask completely. The volto was made of fine wax cloth and so was light and comfortable to wear, making it ideal for a night of socializing and dancing.

Now I suppose you are well-prepared for  your masquerade – enjoy!

This entry was posted in miscellaneous essays. Bookmark the permalink.

24 Responses to The masquerade – Venetian carnival and masks