Posted on June 14, 2012 by portiabridget
I’ve visited a friend’s blog recently and I was literary blown over by a picture of one of the most fascinating libraries around – Trinity College Library in Dublin, Ireland. It also gave me an idea of a series of posts about the best, the most beautiful, the strangest and the biggest libraries there are. The libraries that can make you drool, where you would be able to spend an indefinite period of time without noticing, where you would like to live and die till the end of the world (if they only served coffee and cake that is). Perhaps you can’t visit them all but what is the Internet for? I’ll try to illustrate my posts as well as it is only possible, providing, I hope, a nice tour for every visitor around. Enjoy!
The second venue, presented by me in this series, is the King’s Library, known also as the King George III library, currently a part of the British Museum in London.
Yes, it is not a library sensu stricto as you most certainly can’t borrow any books here and I admit I am biased – I visited that once and I was completely enchanted! Let me show you why:

The King’s Library was a royal collection of books created by King George III and donated to the nation. A gallery, named after the collection, was built at the British Museum in 1827 to house them. It is the oldest room in the Museum and now home to the permanent exhibition Enlightenment: Discovering the world in the eighteenth century. The exhibition is worth visiting but the library itself is…simply mouthwatering.

When the library was donated there was not enough space to house it in the original British Museum building. This led to the construction of today’s quadrangle building, designed by the architect Sir Robert Smirke (1781–1867). 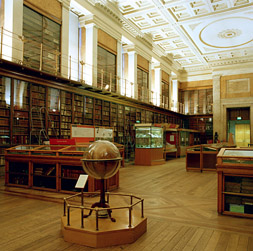 Originally, it was not intended to be a public room. There were two entrances, one at either end of the room, and 12 reading desks to be used by the library assistants. The central section of the room was meant to consist of 12 columns made from Aberdeen granite. The first four were bought, and are still in place, but the cost of polishing them was so expensive that no more were purchased.

You might wonder what these different sculptures, pottery, globes and mineral samples do in a library. It’s all about fashion. During the eighteenth century many wealthy men aspired to  show that they were ‘gentlemen’. Their libraries contained not only books, but also artefacts, especially coins and medals. These objects were considered as historical and material evidence that could be interpreted in the light of knowledge from the books in the libraries. George III had these ambitions for his own library as well (apparently in those times even the king felt an urge to prove that he was a gentleman – I approve) and had the money to create one that could cover all areas of knowledge.

That’s why his library contained a large collection of porcelain, bones and fossils, coins and medals. These artifacts were arranged in sequences that related them to the chronologies of written histories.

Have you visited it? Would you like to visit?