Posted on November 20, 2012 by portiabridget 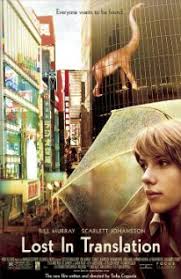 If you are an European or an American and you wanted to visit a very exotic country with a great culture but as different as possible from your own, where would you go? A small hint – you should try Japan. You won’t be able to read the simplest newspaper headline or signboard (just read, I don’t speak about understanding it) and even all those old good Arabic numerals will be mostly non-existent. What cheer, isn’t it? Small wonder such an extreme environment can force two foreigners, even as they differ from each other in practically every way, to spend their free time together and befriend each other.

Bob Harris, an aging American movie star, arrives in Tokyo to film an advertisement for Suntory whisky, for which he will receive $2 million. Charlotte, a young college graduate (she studied philosophy, imagine that!) freshly married to a celebrity photographer, John, is left behind in her hotel room as her husband has to work long hours on an assignment in Tokyo. Charlotte is unsure of her future with him, as she believes he takes more interest in his celebrity models, most notably a young and popular American actress named Kelly, than he does in her. At the same time, Bob’s own 25-year marriage is lacking in romance as he goes through a midlife crisis and a career crisis at the same time. After a chance meeting in a lift these two develop a rapport and then a friendship while experiencing the differences between Japanese and American culture, and between their own generations.

Charlotte invites Bob to meet up with some local friends of hers. Bob accepts and arrives later at her hotel room dressed in clothes that appear to be designed for somebody at least 20 years younger. They go out and have fun in a karaoke bar with a couple of friendly Japanese (some of them even speak English). On the penultimate night of his stay, Bob attracts the attention of the resident vocalist. The next morning, Bob awakens to find the woman in his room, having apparently slept with her. Charlotte arrives at his room to go out for breakfast only to find that woman singing peacefully in the background. It creates a conflict and tension over a subsequent lunch. Later that night, during a fire alarm at the hotel, Bob and Charlotte reconcile and express how they will miss each other as they make one more trip back to the hotel bar. Still will their bond, created almost by accident in a foreign country, last longer than their Japanese adventure? What have they learned, spending so much time together in different circumstances?

I expected a lot from that movie and it gave me even more. There’s not a word or a wistful glance out of place in Sofia Coppola’s offbeat comedy drama. The tale of two Americans in Tokyo who come together in culture shock is all at once laugh-out-loud funny and lovingly tender. Not only fans of Bill Murray will relish, in my humble opinion, the most subtle performance of his career.
His hangdog charisma serves him to perfection as jaded movie actor Bob Harris, alone in Tokyo to shoot a tacky whiskey commercial, thoroughly bewildered by the in-your-face enthusiasm and politeness of the Japanese. Bob faces a midlife crisis, he is shocked by a completely alien culture and he feels his career goes downwards even if he still earns a lot. A whimsical twentysomething, Charlotte is struggling to find her place in the world, wondering whether she took the right decision and married the right man. Like two negatives these two ‘lost souls’ are magnetically drawn to one another and inevitably wind up making beautiful music – in a karaoke booth, where else? I must admit it is easy to imagine why somebody like Charlotte fell for somebody like Bob. He might be much older, balding and not exactly handsome but he cares and he pays attention to her. Overall Coppola gives her primary characters a Gothic twist replacing the older, brooding, tired masculine figure and the young, naive heroine with a feminine adventurer who provides the masculine figure with the motivation and opportunity to journey into the unfamiliar landscape.

I liked an ethereal, dreamlike quality of this movie, something only distantly connected to soft-focus close-ups and an atmospheric score. The twinkling neon lights of Tokyo become the fairytale setting, its peculiarities giving rise to brilliantly surreal comic twists. Marvel at Japanese television’s answer to Graham Norton, or the overzealous hooker who tackles Bob in what looks like an ungodly game of Twister.

It’s true that the laughs sometimes come in broad strokes (‘lip my tights!’), but more often Coppola demonstrates a delicate touch, never losing sight of the heartbreak that looms over her characters from day one. Like all the most memorable love stories, the tale is bittersweet, beautiful, and immaculate. And it is far more than that. In my opinion Lost in Translation offers a new spin on the romantic comedy – its narrative is rather minimalistic, it focuses on the Gothic’s “negative register” plenty of secrets, unfamiliar spaces, estrangement and dislocation in every plane. It explores cultural dislocation, loneliness and emotional estrangement by highlighting the gap between seeing, hearing and understanding. Not that the characters don’t try to fit in, they do: Charlotte visits a Shinto shrine, Bob asks his interpreter to be more precise while rendering the words of the director, shooting the commercial. Still they don’t succeed and the presence of the Gothic casts a shadow over the promise of romance between them although they need it both.

I’ve read reviews in which people complained that this movie was actually boring. You know, I can see their point. In superficial terms, Lost in Translation seems to be indeed a film in which nothing much happens. Its plot is fluid and subordinated to the more ephemeral story elements. Silence is more expressive than dialogue and poetic lyricism dominates spectacle. I found it very sublime but I think it is not everybody’s piece of cake.

Lost in Translation begins explicitly and ends implicitly. The opening title credits are pasted over a close up of Scarlett Johannson’s bottom covered in pink lacy underpants – a very controversial opening shot but also one which belongs to a classic repertoire of the cinema. In 1963 Godard produced a prologue for Contempt (Le Mépris) which comprised an extended single shot of Brigitte Bardot’s naked body, focusing particularly on her bottom. Coppola’s intention with this opening shot appears to be to defy taboos and to undermine expectations surrounding what might be considered the “money shot” in more traditionally exploitative cinema – just another way to emphasize the fact that more often than not things are more complicated than they appear at first glance and yes, it also concerns lacy underwear.The movie ends with a beautiful scene (spoiler, highlight to read) Bob’s final words to Charlotte are audible only to her, and her reaction is really fantastic, creating a devastatingly beautiful moment of realizaition that while her future is uncertain, she will always have Tokyo.

One minor carping. The fact that Tokyo is never much more than a metaphor there I find to be a downside of this movie. It felt as if great foreign cities exist only so that  Americans like Bob the fading megastar and Charlotte, a bit less privileged Yale grad can have a special environment for their struggles and epiphanies. While Bob and Charlotte worry that they will never carve fully-fledged identities for themselves, away from the demands of other people that is, the movie is making Tokyo, a vibrant, interesting city per se, fully dependent on them, miniaturizing it into just a pocket mirror of their souls. Also the Japanese supporting cast seemed just slapsticky, without a voice of their own.

Definitely one of the best movies I have ever seen – a love letter to the totally unique and haphazard connections that human beings make with each other when they feel disconnected from the things that normally frame their lives. It was made with great technical prowess, it sparkles with a great sense of humour and asks you difficult questions without providing any easy solutions. Just like real life.