The death of the Borgias

Three years and it’s over. Done before its time. But as in the time of the Borgia Pope, money still makes the world go around and the network executives rather keep the coins in their pockets rather than bless their parishioners with two more hours of Vatican splendour from five hundred years ago.

Spoilers! Spoilers for all three seasons of The Borgias.

The Borgias isn’t an easy show to watch, but it’s an easy show to love. Or hate. It marches out a slew of historical figures and twists their lives and events into a fictitious plot barely resembling historical accounts. It’s the gossip rags of the sixteen hundreds brought to alive. There’s sex and corruption, murder and mayhem, and it’s all centred around one family. The original crime family as I’ve seen some say.

You have Jeremy Irons playing Rodrigo Borgia, a cardinal who buys his way into the highest office on earth in 1492 and becomes Pope Alexander VI. He’s a pragmatist with ambition for himself and his family… and supposedly the show revolves around him. After three years (well two years and three season) of watching the show my recollection of Irons’ part in the show is very vague. There was the lechery, the greed, and a hint of religious fervor but all in all his portrayal is bland. Is role as Pope Alexander VI is insipid enough to utterly escape my memory. There’s even a brilliant scene in the show explaining the actor’s likeness—or lack thereof—to the original but other than that I couldn’t really tell you what makes Rodrigo Borgia tick. Delusions of grandeur perhaps.

And I think the show runners realised this because as much as the show—and the history—relies on the father Borgia, the show focuses on his children Cesare (François Arnaud), Juan (David Oakes), and Lucrezia (Holliday Grainger), who are pawns to their father’s ambition. Their mother, Vanozza Cattaneo played by Joanne Whalley barely flickers on the screen other than to offer a few sage advice to her children and to throw a fit when Rodrigo claims he must embrace celibacy for his new office and then promptly proceeds to take on a new mistress.

Cesare in particular is the nexus of people and alliances. He yearns for a career in the military but his father has other plans for him and this fuels Cesare’s troubled relationship with his brother. Their mutual jealousy that dominates the familiar interactions just as Cesare’s incestuous love for his sister provides the long plot for the show. Neil Jordan and co. take the time to build that delicate relationship showing care guiding the characters to where the story must take them. There are no justifications, just reasons that make it understandable. 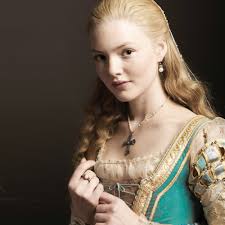 Holliday Grainger transforms from the young and naive fourteen year old into a shining, independent woman (as much as that was possible around that time) who even brings a French King to his knees. Figuratively. In all her pain and happiness, it’s Lucrezia who seduces her beloved brother because only he can fulfil her every need. It’s her who crosses the line, if there ever was a line between them.

Even with all these delicious connections and the underlying political machinations Cesare operates for his father, the most interesting character in the series is Micheletto played by Sean Harris. He is Cesare’s henchman, his loyal assassin, and a man who kills even himself for his Lord.

From the beginning where Cesare turns his would be killer into a loyal servant, the chemistry between François Arnaud and Sean Harris is what kept me riveted to the show. Seemingly for no other reason than that he feels like it, Micheletto decides to make Cesare the focus of his life. Thus everything that is important to Cesare becomes important to Micheletto and he’s willing to suffer tremendous pain to keep his master’s secrets. 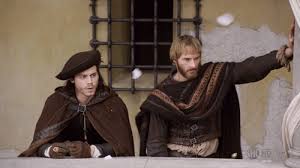 It’s love at first sight. Quite literally. The show never says it explicitly, but considering Micheletto’s background  revealed in the second season (which differs greatly from the historical accounts) and his short love affair with one of Leonardo da Vinci’s models, Pascal (Charlie Carrick), it’s quite obvious that Cesare is the love of Micheletto’s life. And certain scenes after Micheletto’s departure make me think that love isn’t quite as one sided as Micheletto believes.

Although, I’m fixating on Cesare as the catalyst for the relationships and the political intrigue of the show, I have very little to say about his character. Almost as little as I had to say about his father. Maybe that is because after Juan’s death, Cesare becomes somewhat an aloof figure. He starts his long journey down to the pits of hell and step by step he’s determined to reach his destination.

Only we never get to see him get there. The ending of The Prince leaves many questions unanswered, but I have to wonder if it’s not for the best. If not only implying to the imminent doom is a more powerful closure to this story that began from the middle than witnessing a rushed montage of characters succumbing to their deaths in faraway lands and absent from Rome. It might even be a better ending than Pope Alexander IV being denied absolution on his deathbed.

I’m going to miss this show.

This entry was posted in rameau, tv series and tagged series review. Bookmark the permalink.

14 Responses to The death of the Borgias