Reviewing a Classic, Quotes and Notes: The Sheik by E.M. Hull

Lady Diana Mayo and her older brother, Sir Aubrey Mayo are two perfect examples of British upper class – people with too much money, too much time and too little brains between them. I would call them a Mayo salad gone wrong: completely green (her), rather heavy to digest (him), very pleased with themselves, all form no substance (both of them).

You see, everything is nicely explained in big, stinky infodumps at the beginning: Diana was brought up by Aubrey after the death of their mother during the birth followed by the suicide of her father. Poor Aubrey had no idea how to raise a girl, being a 19-year-old boy at that time and apparently not very bright, so he brought her up as if she was his younger brother. Surprise surprise, the result was such that the girl became spoiled rotten – she smoked, she wore men’s clothes, she did only what she wanted and when she wanted, she was arrogant and she knew everything best. A marriage proposal from a young, kind, conventional gentleman, deeply in love and full of best intentions? Preposterous! Silly! Why would she want to get married at all? Such an attitude, according to Ms. Hull, begs for punishment and punished it will be.

Let me start with a scene when the siblings are quarreling about Diana’s latest plans how to spend a month without being bored to death by the polite society and its restrictions – she intends to travel alone across the desert with a caravan of Arabs for the whole company. A very foolish idea which doesn’t prove Diane’s independence but her complete lack of brain and imagination. Still it is her idea so it must be good. She announces:

“I will do what I choose when and how I choose, and I will never obey any will but my own.”
Sir Aubrey’s eyes narrowed suddenly.
“Then I hope to Heaven that one day you will fall into the hands of a man who will make you obey,” he cried wrathfully. Her scornful mouth curled still more scornfully. “Then Heaven help him!” she retorted scathingly, and turned away to her tent.„

As you see Diana is a spoiled, stupid girl – very strong-minded, completely persuaded about her own worth, almost foolishly green. It seems she is emulating her namesake goddess, Diana or Artemis, and here comes her Orion. However, as Diana is no real deity, just a spoiled brat, she has no chance against him. 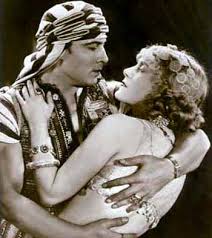 “She writhed in his arms as he crushed her to him in a sudden access of possessive passion. His head bent slowly down to her, his eyes burned deeper, and, held immovable, she endured the first kiss she had ever received.”

Yes, the time of comeuppance has come: according to Aubrey’s brotherly wishes a brutally handsome sheik kidnapped our intrepid heroine as soon as she was left alone in the desert and decided to help her understand what women are really created for. Welcome to Middle Ages, ladies and gentlemen, prepare your whips, chastity belts and proceed. Things will turn ugly very soon.

“Her body was aching with the grip of his powerful arms, her mouth was bruised with his savage kisses. She clenched her hands in anguish. “Oh, God!” she sobbed, with scalding tears that scorched her cheeks. “Curse him! Curse him!”” 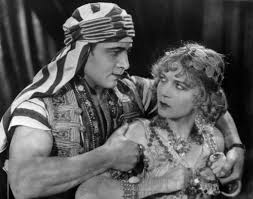 Indeed. As you can guess Diana had no other option than to endure the rape and feel bad afterwards but at least she was also offered a bath, a friendly Arab servant girl and a meal. Which made it almost ok, right? Ahmed ben Hassan was not a total beast or a caveman after all. You see, he could read and write and had an artistic soul – go figure…

“She was utterly in his power and at his mercy—the mercy of an Arab who was merciless.”

Ha! That’s the fate which, according to our authoress, befalls arrogant little fools who, being born just lowly girls, want to pretend they can be like boys or even like men who are, of course, the peak of creation, the epitome of all perfection and finesse! Read and learn, foolish creatures!

“She had paid heavily for the determination to ignore the restrictions of her sex laid upon her and the payment was not yet over.“

Here was Diane’s problem – it was all her fault to begin with, for being too avant-garde. Of course her punishment wasn’t over. She sinned too much, cutting her hair short and going around in breeches, on her own day and night, smoking those cigarettes, bad, bad girl. Our authoress, showing a really cruel streak, decided to torment her victim further. 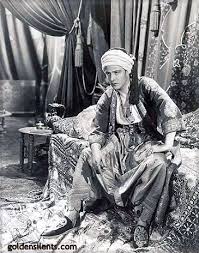 “And, according to his mood, he noticed or ignored her. He demanded implicit obedience to his lightest whim with the unconscious tyranny of one who had always been accustomed to command. (…)She was physically afraid of him, and she hated him and loathed herself for the fear he inspired. And her fear was legitimate. His strength was abnormal, and behind it was the lawlessness and absolutism that allowed free rein to his savage impulses. He held life and death in his hand.”

If you are bigger and stronger you can do everything and anything! Hell yeah, male dominance forever and sieg heil! Err… I mean, of course, how horrible! But it was her fault, she had it coming, right? All her fault! She provoked him!

“ With a start of recollection she realized fully whose arm was round her, and whose breast her head was resting on. Her heart beat with sudden violence. What was the matter with her? Why did she not shrink from the pressure of his arm and the contact of his warm, strong body? What had happened to her? Quite suddenly she knew—knew that she loved him, that she had loved him for a long time, even when she thought she hated him and when she had fled from him. She knew now why his face had haunted her in the little oasis at midday —that it was love calling to her subconsciously.”

Sigh and groan…why I am not surprised? Of course she had to fall in love with him – who wouldn’t? After the ruthless kidnapping, humiliations, imprisonment and a series of rapes she was being dragged endlessly through a desert; she had to love her torturer, right? He shot her horse before her own eyes and was flogging different men to show that when it came to punishment, girls and boys, Ahmed always meant business. Who wouldn’t fall in love with such a man?

“ He was a brute, but she loved him, loved him for his very brutality and superb animal strength. And he was an Arab! A man of different race and colour, a native; Aubrey would indiscriminately class him as a “damned nigger.” She did not care. It made no difference.”

Moral elevation of a female mind through complete submission and a series of rapes. Please let me puke for a moment or two.

” He was an Arab, and to him a woman was a slave, and as a slave she must give everything and ask for nothing.” 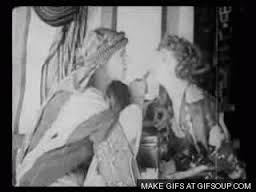 Honestly, who needs emetics or purgatives with quotes like that?

And here comes the educated second opinion from a completely civilized French gentleman, a close friend of our Arab, who came for a visit and shared with Diane such a pearl of wisdom:

“Beautiful women, Madame,” he said slowly, “unfortunately provoke in some men all that is basest and vilest in their natures. No man knows to what depths of infamy he may stoop under the stress of a sudden temptation.”

It might be a favourite quote of, I believe, every heterosexual rapist on Earth. It conveys more or less their favourite message: women, the victims, are the real source of the evil. Without women men would be like a bunch of angels. Banish all women, especially those beautiful and young – no temptation, no crime, the world is a paradise.

“Sex had supervened to overthrow all her preconceived notions. The womanly instincts that under Aubrey’s training had been suppressed and undeveloped had, in contact with the Sheik’s vivid masculinity and compelling personality, risen to the surface with startling completeness.”

I beg your pardon? Since when a rapist and an aggressive control freak has a compelling personality? Since when forced sex can make you understand anything better? Now let me mourn Diana and this novel in silence. Such a big pile of stinking rubbish should rest in peace.

“Diane, Diane, my sunshine. The tent is cold and dark without you….Ibraheim Omair! That devil and Diane! Oh, Allah! Grant me time to get to her….How the jackals are howling….” 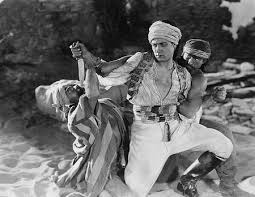 Typical. Only when she is abducted by another skeik and no longer available, her beloved Ahmed finally finds something nice to say to her and shows that he cares at all. Yawn. And of course since Lawrence of Arabia no sheik is a real sheik if he doesn’t have some British aristocratic blood in his veins hahaha. Nice touch about the jackals btw. Let them howl some more. I might join them out of sheer frustration.

Heavens help me it is a 1919 book. It depicts an immature, bratty heroine being ‘tamed’ by a man who rapes her repeatedly and generally treats her like an object. This is exacerbated by the fact that she falls in love with her rapist, head over heels, and never wants to leave him – the fully fledged Stockholm syndrome with a dash of good old masochism. I would call this novel an ugly mother of the worst Harlequin romances. I don’t know much about psychology but it seems to me Ms. Hull really hated strong, independent women, I wonder why. Still she got her revenge no problem.

Was it worth reading? Hell, yes. It made me understand so many things. But look, madam, what you have done to the literature at large. Only look at this mess. You should be so ashamed of yourself.

All stills are taken from The Sheik, a 1921 American silent romantic drama film directed by George Melford and starring Rudolph Valentino, Agnes Ayres, and Adolphe Menjou.

ETA: check also the awesome discussion Heidenkind and I had some time ago

This entry was posted in book review, classic and tagged E.M. Hull. Bookmark the permalink.

2 Responses to Reviewing a Classic, Quotes and Notes: The Sheik by E.M. Hull