Cute Plant From Hell (but hey: devils can be useful too)

Posted on August 2, 2013 by portiabridget
Do you recognize this plant?

So, do you recognize it? If your answer is still no, you are lucky. However it is very possible that you have seen that murderous beauty  and you haven’t known that you actually met one of these superplants which can survive no matter what..

Japanese knotweed (Fallopia japonica, syn. Polygonum cuspidatum, Reynoutria japonica) is a large, herbaceous perennial plant, native to eastern Asia – Japan, China and Korea.The species has been so very successful elsewhere that it has been classified as invasive  in several countries. In fact it is listed by the World Conservation Union as one of the world’s 100 worst invasive species. Why?

Ponder over this. It grows everywhere. More specifically, it grows through everywhere.The invasive root system and strong growth of this plant can damage concrete foundations, buildings, flood defences, tarmac roads, paving, retaining walls and architectural sites. It can also reduce the capacity of channels in flood defences to carry water.It forms thick, dense colonies that completely crowd out any other herbaceous species. Its resistance is really amazing. Rhizomes of Japanese knotweed can survive temperatures of −35 °C and can extend 7 metres (23 ft) horizontally and 3 metres (9.8 ft) deep, making removal by excavation extremely difficult.
The plant is also resilient to cutting, unless it is done repeatetively and combined with herbicide treatments. Otherwise it is vigorously resprouting from the roots in no time. Studies have shown that a 1cm section of rhizome can produce a new plant in 10 days – a true record. Rhizome segments can remain dormant in soil for twenty years before producing new plants.The most effective method of control is by herbicide application close to the flowering stage in late summer or autumn. Still who would want herbicide-soaked soil in their backyard or anywhere else? The herbicide treatment may have to be used for at least three years before Japanese knotweed stops growing back. Even when the plant seems to be completely eradicated any soil removed from the area is likely to have dormant rhizome and must be disposed of as described within the knotweed code of practice. Which means you’ll spend a lot of time and money to get rid of this.

How has it found its way to our backyards? Japanese Knotweed was introduced as an ornamental plant by the freaking Victorians in 1825. Allegedly it was shipped from Japan. It looked cute, its flowers smelled cute, it must have been cute. right? The great garden-writer William Robinson recommended it warmly in The Wild Garden of 1870 for its “large and noble tufts of lively green, which increase in beauty from year to year”. Yeah, I’ve always known that the aliens would conquer our planet in one week if only they presented themselves in a form of sweet, fluffy bunnies.Already by the 1880s, gardeners had become alarmed by the plant’s invasive tendencies. As you might guess it was already too late.

Funnily enough this monster has a second, also very interesting face. Scientists are reporting that Japanese knotweed could hold the answer to the oil crisis and provide a sustainable, clean source of energy. The plant’s ability to generate massive amounts of energy is simply uncanny – by pyrolysing knotweed rhizomes in low temperature ovens, the gas and hydrocarbon fuels generated are only slightly lower in yield than some brown coals.

That horrible plant might also restore your health. Yes, you read it right. The leaves and shoots are edible and the roots contain resveratrol which has been identified as a potent flavonoid. How can it be helpful?

Extracts from Japanese knotweed rhizomes have been used in traditional Chinese medicine for centuries. Resveratrol decreases the viscosity of the blood and acts as anticoagulant to thin blood, effective in treating cardiovascular disease by reducing thrombosis and embolisms that can block arteries and lead to myocardial and cerebral infarctions (Wang et. al, 2002). Resveratrol has been found to reduce tumor volume, tumor weight, and lung metastasis; it  inhibits cancer cells without harming the liver. Studies indicate the most beneficial use to be in pancreatic, breast, and ovarian cancers.

Alternatively you can also eat this ugly invader. Yes, I am dead serious now, that monster is edible. Related to rhubarb, it’s very sour and may act as a laxative the way rhubarb does, so use it sparingly at first. Most importantly, be sure that any harvesting of Japanese knotweed does not result in its spread. Never add knotweed to your compost or send it to municipal compost center – in many countries it is against the law and you might be sued. So, what exactly can be done with it? I found you one yummy recipe.

DANDY KNOTWEED MUFFINS
The best time to gather young knotweed shoots, up to about 8 inches, is in early spring (the larger ones are tough and stringy). Some people peel the outer skin off the shoots, but that can be tedious, and if you’re not careful, you may peel too much off. 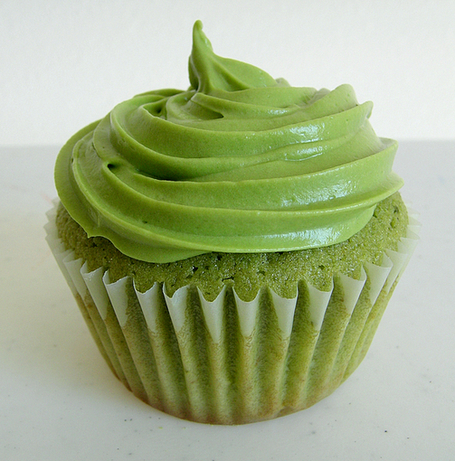 Snip off the pointy tops of the knotweed stalks and mince.
Combine flour, dandelions, baking powder, and baking soda in a small bowl.Cream 0.5 cup butter with 1 cup brown sugar until fluffy. Beat in eggs one at a time and then add the vanilla. To this mix, alternately fold in the sour cream, dry ingredients and colouring until blended. Fold in the knotweed pieces. Divide the batter into greased muffin forms.

Bake at 350˚F for 15 to 20 minutes, until the muffins test done in the center proves they are ready.

You can decorate it with some cream at the top.

This entry was posted in miscellaneous essays. Bookmark the permalink.

8 Responses to Cute Plant From Hell (but hey: devils can be useful too)