Posted on September 1, 2013 by portiabridget

Meet Dave Lizewski (Aaron Taylor-Johnson), an ordinary, unnoticed teenager who lives in Staten Island, New York City. Like plenty of his high school buddies he has just two loves: comic superheroes and girls, preferably with big boobs. As he cannot get the latter one day he decides to become a real-life superhero and improve his social life because he is sure a superhero can pick and choose among gorgeous, willing females. Show me a healthy male teenager who wouldn’t like to follow suit?

After purchasing online a stylish diving bodysuit, green with lovely yellow accents (;p), a pair of matching gloves and combat boots, he embarks on a campaign to fight the NYC street crime. Or crime in general. Beginnings are often difficult, though; one of the first Dave’s encounters with real thugs results in him being seriously injured as a victim of an accidental hit and run. Dave is taken to a hospital with multiple fractures, facing a period of extensive rehabilitation, with metal plates embedded inside his body for the rest of his life. A lesser man would give up but not our horny teenager. Apart from that every cloud has a silver lining – now he is more resilient and his pain threshold is lower – baddies beware! 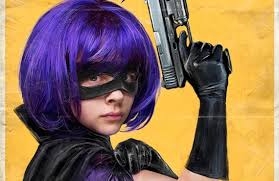 actions are recorded by bystanders and put on the Internet. That turns him into an anonymous celebrity, a fact which he intends to explore to the maximum. He calls himself “Kick-Ass” and sets up a Myspace account so people can contact him and ask for help. Soon enough Katie, his high school crush, sends a request as well – she cannot get rid of a certain drug dealer, Rasul; Kick-Ass is only too willing to intervene. And here the story really kicks off (pun intended): Kick-Ass, armed with a pair of batons and a teaser, visits Rasul in his den only to find out that once again he bit more than he could chew – other gangsters swiftly overpower him. While he is waiting to be murdered, all of a sudden he is rescued by an eleven-year-old vigilante Hit-Girl (Chloë Grace Moretz) who gets rid of Rasul first and then ruthlessly dispatches all of his thugs. After a repartee she  leaves with her father, Big Daddy (Nicolas Cage), dressed up as Batman. Dave is left stunned and humiliated – like any teen boy would be – but still he soldiers on . Now he has a reputation and popularity to uphold, right? Not to mention girls to bed.

Soon enough we find out that Big Daddy is Damon Macready, an honest former cop who was framed as a drug dealer by crime boss Frank D’Amico (Mark Strong), which led his wife to commit suicide. Big Daddy trains his daughter Mindy to be a skilled crime-fighter and works to undermine D’Amico’s operations. D’Amico believes Kick-Ass is responsible, and targets him, impulsively killing a party entertainer dressed like Kick-Ass. D’Amico’s son, Chris (Christopher Mintz-Plasse), suggests a different approach. He assumes the role of the vigilante “Red Mist” in order to befriend Kick-Ass and lure him into a trap. When they arrive, Frank’s men are dead and the warehouse is on fire. With the help of the teddy cam, they find out it was Big Daddy who killed Frank’s men and set the warehouse on fire. Now the power struggle starts for good and Kick-Ass finds he cannot simply back out because gangsters also have a reputation to maintain and they are as stubborn as your average superhero wannabe. Still, their weaponry is superior. Who will win the bloody showdown? Any comic reader won’t have any problems with answering this question.

After watching this movie I was left conflicted. On the one hand I can appreciate a story that is original, well told, well paced and, overall, interesting to watch. On the other hand this film can be described as a crash between an average Tarantino bloodbath and a YA novel with some superhero flavour. In its course  humans are microwaved, crushed in trash compactors, skewered, bazookaed, beheaded and burned alive. Mind you the movie is mainly aimed at high school teens, with fresh-faced young actors playing the main roles. Their play is very good by the way but the characters they impersonate…well…

Dave, the main protagonist and the narrator during  most of the story, is hardly a boy adults would like their kids to watch and identify with. He openly admits that his superhero hobby is at least partially motivated by a necessity to get into the pants of his unavailable school crush, Katie. He cannot distinguish between ugly reality and his dreams, believing strongly that it’s enough to dress up like a green cucumber (or, alternatively, a green condom) and you can become another Superman or Spiderman in no time. When he is not busy showing off as a vigilante, he masturbates and, later in the movie,  has sex with Katie, (both scenes are just suggested, not shown, but even a suggestion is enough because we are speaking about minors here). Still plenty of critics would turn a blind eye to all these facts if not for another, even more controversial character – Hit Girl.

Mindy Macready a.k.a Hit Girl is one of the most charismatic characters of the movie. She 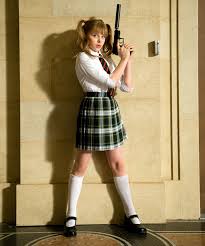 is also…an eleven-year-old, a fact that leaves many    right-wing critics frothing at the mouth. Mindy is schooled at home in different martial arts by her own father,  and she acts as ruthlessly as your average adult  gung-ho movie killer: she beheads and guts adult men with gusto, never showing any emotions or the slightest pangs of conscience. In fact you have an impression she and her daddy are enjoying themselves thoroughly. In one scene, the girl faces a hallway jammed with heavily armed gangsters and shoots, stabs, slashes and kicks them all to death, while flying through the air like a miniature female Jackie Chan impersonator.  She is also swearing so often that it seems she wants to break a record, e.g. calling her opponents ‘cunts’. Still other scenes don’t let us forget she can also be a cute, dainty little girl with bangs and pigtails, wearing pleated skirts and an angelic smile on her sweet, innocent face (see the photo on the right). Even dressed up as Hit Girl, with a purple wig, a Zorro mask and a black leather outfit on, Mindy reminds you rather of one of those ‘Goth’ dolls, not of a cold blood murderer.  I admit the whole contrast can be confusing, momentarily almost painful, especially when you have to watch a hand-to-hand combat scene featuring a little girl and a ruthless adult gangster who shoots and hits to kill. Even if you are fully aware that it is just a comic book turned into a movie, something like an exaggerated fairy tale with a dark twist, you are bound to flinch.

What’s even more disturbing, adults don’t act responsibly here. Hit Girl’s loving dad only encourages her further: sometimes he makes her wear a bulletproof vest and shoots at her so she knows how it feels to take a bullet and never flinches. They go to a bowling alley and eat ice cream afterwards, like a normal family. Hit Girl never questions the way she’s been brought up; she believes that her vigilante dad is a hero just as much at the end as she did at the beginning. Small wonder different Christian reviewers have been condemning the movie, its director, the actors and everybody who dares watch and praise it.

I grant it, this time they might have a point. I felt that, after a while, the movie lost its nerve in a sense and actually lightened up the violence which caused the comics message to

be lost a bit.  You see, I haven’t read the comics themselves but I did my research. In the comics the murders committed by Hit Girl are much more brutal but, as an explanation, we get a much closer look at Big Daddy’s mental problems and the abuse Hit Girl unknowingly is subjected to (e.g. her father gives her cocaine telling her its a super soldier serum). The satire on such ‘homeschooling’ loses its message in the movie because the director wasn’t willing to go far enough with the darker, more mature aspects of the Hit Girl and Big Daddy’s story.

Now let me turn into a devil’s advocate. The movie still remains an explosive ride that covers insane action sequences, intelligent superhero parodies and a great soundtrack to match, with choice tracks taken from excellent films such as 28 Days Later and For A Few Dollars More, alongside great songs from The Prodigy and Sparks to name a few. The  music fits perfectly with the high-octane action and even adds emotional depth to key scenes – not bad for a superhero comedy flick!

To any adult who would like to watch this movie I would tell: “You pay your money, you pick your poison.” If you think mixing one of the Tarantino splatters, Avengers and Leon: The Professional with a cartoon-style sense of humour is a good idea you might end up entertained, even satisfied. I admit I was entertained as well but only up to a point. What bugged me about this movie was how it seemed to glamourize death and lighten up the violence, showing improbable bloody feats performed by a small girl swearing like a sailor. I waited for any logical justification of that and wasn’t given it at all. That’s why I think this one is highly unsuited for those kids and adults who still have problems with distinguishing between fiction and reality.