Posted on September 22, 2013 by portiabridget

Clara (Gemma Alterton), a hardworking lap-dancer in a night club,  and her daughter, Eleanor (Saoirse Ronan),  are two female vampires. They live precariously, ready to run to another place whenever they sense any danger – they can be long-lived but they are hardly immortal. One night Clara is fired for defending herself too expertly against a pushy customer; then the same evening she is attacked by a male vampire. After a ferocious fight she decapitates the agressor, torches her flat and both ladies escape the crime scene .

They go to a bleak seaside town. Needing money Clara hangs out by a funfair and soon her looks attract a punter. She agrees to give a blow job to Noel (Daniel Mays), a furtive, bespectacled, anorak-wearing drip. In the middle of things Noel starts crying and blubbering – his mother has just died, leaving him an old-fashioned, run-down guest house to manage and he doesn’t know what to do with himself. Clara seizes that opportunity, and that man, with both hands. She reckons Noel’s inheritance  could easily be repurposed into a lucrative seafront brothel, her favourite type of business, and a comfy hiding place for her and Eleanor. She persuades Noel, using her charms and bedroom skills, to let her stay with him and try to help. Noel is only too happy to agree.

Meanwhile, Eleanor, still looking like a dreamy, innocent teenager, enrols at sixth-form college. She feels uneasy at home and she has no friends. Soon she horrifies her teacher (Tom Hollander) by making him think she must be a victim of abuse – in an autobiographical writing assignment Eleanor claims that she and her mother are hundreds of years old. She also befriends Frank (Caleb Landry Jones), the sickly teen with terminal leukemia who instantly falls in love with the mysterious girl. After initial hesitation Eleanor tells him their lethal secret – she and her mother were born 200 years ago and have survived on human blood. As knowledge of that secret spreads, their past catches up on them with deathly consequence.

The story intercuts with some blasts from the past in the form of sinister, occult events that took place on the same town two centuries previously. They feature two dashing veterans of the Napoleonic wars: Darvell (Sam Riley) and Ruthven (pronounced “Riven” and played by Jonny Lee Miller). Both gentlemen fall in love with the local girl. One of them seduces her and sells to a brothel – the ruined girl is our Clara and so starts her change into a blood-drinking predator.  How long will she manage to survive while protecting her daughter?

I haven’t seen a good, intelligent vampire movie for ages (with the firm emphasis on ‘good’) and I really though this one had a chance to break the period of fasting. The trailer gave me hope – the film not only promised to feature a mother-daughter combo, you have to admit a rare occurence when it comes to that genre, but also its vampires never sparkled (woo-hoo!). What’s more Jordan is no stranger to the yearnings of vampires, in fact he directed Interview With the Vampire some (long) time ago.

Unfortunately it didn’t work as I expected – not really.

All started well – with two females being pursued by some armed vamp ‘officials’ because they weren’t entirely ‘legal’. Clara, the gutsy and older one, seemed to be determined to keep them at bay in older to protect Eleanor, allegedly her younger sis, in fact her daughter. As the story unfurled you were presented with the background of both women who had been born in the Regency England, with all the social and economical consequences. And here I experienced the pangs of my first serious disappointment. I might be naive but seeing the title of the movie I’d thought we would be moved back to the Byzantine era, if only for a while. No such luck. This literary name rather echoed the Irish poet William Butler Yeats’s Sailing to Byzantium, on the anguish of mortality “when the heart is fastened to a dying animal.” Poetic it might be, still the real Byzantium would suit me better. 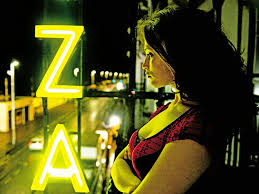 After a while the drama started to feel both strenuously earnest and impossible to take seriously. The solemn, brooding Eleanor and her lustful, unscrupulous mum (or was it ‘ma’?) had too little time to interact in a truly meaningful way to save the show. Despite suggestions that the whole mother-daughter vampire business might, after all, exist only in Eleanor’s damaged head, the film kept insisting otherwise and, in my opinion, the director lost a splendid occasion to tell something more than a hard-luck story with fangs. The bloody flashbacks out of nothing and the mounting body count didn’t add to the clarity of the plot either. The awkwardly reworked vampire mythology, full of  secret maps, mysterious islands, charitable euthanasia and long thumbnails sounded like generic claptrap, and the improbabilities piled up as the film progressed, growing increasingly dull.

Let’s face it: some of the twist simply didn’t make sense for a post-Twilight viewer. Even though the storytelling and its healing power lend “Byzantium” its most intriguing subtext it also proved to be the biggest challenge. I don’t know under what rock the director spent his last decade or so but in the real world Eleanor’s creative writing teacher would not be horrified or even surprised at a pupil’s essay claiming vampire status. In fact, if anybody dared infuse some sense of humour into the story, enlivening it significantly, every girl and boy in Eleanor’s class would be writing a vampire confession.  Perhaps even the teacher himself would be writing a vampire confession under a nom-de-plume – and knocking it out at 99p a copy, direct to the Amazon Kindle.

Time for a change, gentlemen…

Eleanor and Clara were always in need of money, because they existed outside the vampire “brotherhood,” which admitted only men, preferably of noble family. Traditionally vampires have preyed on women – women preying on men wasn’t supposed to be allowed, and so Eleanor and Clara were two renegades. A tough spot but also one which should make you determined to fight like a devil for your safety and independence. Clara, betrayed and abused by men, stole her way into “vampirehood” and, as soon as I learned how she did it, I startet to wonder: how come a vampire/woman as strong, intelligent, business-savvy, ruthless and pretty as her, a woman who, allegedly, never hesitated to use every asset she possesses, be it her brains or her body or both, after 200 + years of continued existence failed to accumulate significant wealth on her own using any means – enough to ensure she and her precious little daughter never went hungry, cold and/or unprotected anymore. A cheap whore turning tricks in a night club, or even an accidental madam of a second-rate establishment at the sleepy seaside simply didn’t match her character. 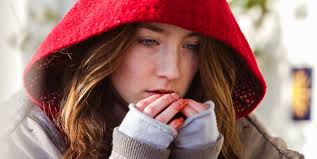 Of course the movie had its moments. Saoirse Ronan’s angelic brooding as  Eleanor and some of her closeups, stricken with grief or longing were simply startling. Still how long you can admire a pretty view? The girl kept gazing at her navel, sighing, moaning and brooding for 80% of the movie – long enough to make me want to smack her soundly.

I didn’t hate myself for watching that movie but I also finished it with a strong sense of disappointment. I would call it a missed opportunity to revitalize a genre that grows morbidly duller with each new repetition. Surely it could have been done with Byzantium: there was more than one good comedy streak in this fractious 200-year-old relationship between a down-to-earth, sexpot mother and her morose, dreamy daughter. Unfortunately those two, no matter how long they lived, somehow remained the same, incapable of growing up. “It takes so long,” Eleanor moans at one point, and of course, she’s more right than she knows, poor girl.