The Amazing Adventures of Kavalier & Clay by Michael Chabon 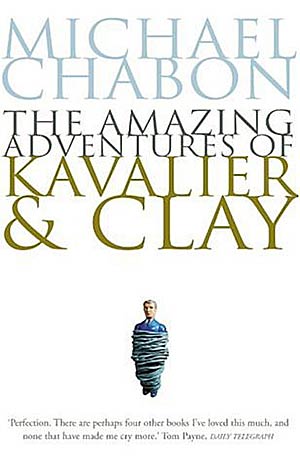 Four hundred pages later, I was bored to tears.

Then, the last two hundred and thirty-nine pages happened and I was raging.

Before the rant begins, let me just say that I can see why this novel won the Pulitzer Price for fiction in 2001. It’s filled with well researched history, big words, and pretentiousness. You know, the kind of things people who say literature is dead or dying like in their books.

The Amazing Adventures of Kavalier & Clay is a mixture of fact and fiction. The blending is done quite well apart from the personal sounding footnotes that cross the line into creepiness. The comment about the cheques Josef Kavalier is supposed to have cashed made me want to set fire to every single receipt I’ve ever had. When Chabon isn’t invading his fictional characters’ personal space, he’s more likely than not giving lengthy explanations on the origins of the modern comic book. As interesting as these narrative back-alleys are, they’re also the novel’s weakness.

Chabon’s indulgence in lengthy expose for expose’s sake—like the letter from his mother Joe never reads—undermines the reader’s connection to his characters. Or, more accurately, to a character of his. There’s distinctly too much of Kavalier and not enough Clay in the adventures of Kavalier & Clay. This book is very much the life story of Josef, Joe Kavalier. It’s a meandering story about his childhood in Prague, his escape from the Nazis at the cusp of the Second World War, his life in the new world, his guilt and second escape, his exile and return. Never is it about his mistakes, cowardice, atonement, or responsibility.

We’re supposed to empathise if not pity Joe’s lot in life, and it might work if the manipulation wasn’t so overt.

I lost my patience with the book and with Joe’s character the moment he walked away and let his only co-survivor shoot a defenceless dog, so they could embark on a pointless suicide mission of revenge. Of course it wasn’t Joe’s fault, he was in bed crying for his dead animal friend.

It only gets worse after that.

Joe’s reasons for running away from the family he has left for the second time might have been understandable, but he had years to get over it and months to decide whether to return to home or not. Months after he’d learned the truth about what he’d left behind. So, when he gives into the temptation and returns home, is he made to face his mistakes and admit fault where it is his? No. Both Rosa and Sammy make excuses for him and forgive him without Joe properly asking for their forgiveness. Neither is their new, complex family situation and its implications hashed out properly, it’s sped through and made as easy as possible for poor Joe who has suffered so.

All this is done at the expense of Sammy, who had it easy. He stayed, took responsibility even when it wasn’t his to take, and became the rock his family could rely on. Of course once Sammy is shown to be one thing, he’s told to have been another. He wasn’t a caring father, he was indifferent.

It’s almost as if the short chapters from Sammy Clay’s perspective are nothing more than an afterthought added into the manuscript in the editing phase. Unlike Josef who becomes Joe, Sammy stays Sammy from beginning to end; he’s never really given the chance grows up. His three characteristics are his polio-weakened legs, his homosexuality, and his inventive storyteller’s mind. I wanted to know more about what made him tick, but it was almost as if the author was afraid to show more and have Sammy compete for the spotlight.

And then there’s Rosa. The naked object of Joe’s lust, talented artist in her own right, but never enough to keep him grounded. She manages to be both the love of Joe’s life and the villainess who distracted him from his true calling of bringing his family to safety.

Propping up the protagonist with paper thin secondary characters isn’t going to make me more sympathetic to him. It makes me mourn the wasted possibilities and resent the injustice done to the more interesting characters.

Usually I love a good and emotional story, but I’m allergic to clumsy manipulation attempts by the author. Based on this book, Chabon needs to work on subtlety.

This entry was posted in a total failure, book review, historical, lgbtq, read in 2013 and tagged Michael Chabon, The Amazing Adventures of Kavalier & Clay, The Rory Gilmore Reading Challenge +. Bookmark the permalink.