Review: Touch Not the Cat by Mary Steward

Posted on November 20, 2013 by portiabridget

When Bryony Ashley finds out that her dad has had a serious accident in Germany she rushes to say her goodbyes. Working in Madeira, she is aware she might be too late. She was alerted by her invisible friend whom she is able to speak in her mind. Such powers run in her family since one of her ancestors married a gypsy girl who was later burnt at the stake as a witch. Bryony has a very strong mental link with that man; still she doesn’t know his name, calling him simply ‘Ashley’, and he is unwilling to reveal his identity. One thing she is sure of: it must be somebody from her family, otherwise she wouldn’t be able to communicate with him.

Meanwhile she arrives to Bad Toltz in the Isar Valley only to confirm that she is, indeed, too late and her father died. However, he managed to leave her a cryptic message, saying that she is in danger and she should look for a map and a letter in their old mansion’s library and a cat on the pavement. Bryony doesn’t understand any of it but she knows it’s time to go home, to England and to Ashley Court, to deal with her inheritance and family. She hopes she’ll meet her secret friend there. She will be safe among her kin…or will she?

First of all I had problems with classifying that book, published first in 1976. It had paranormal elements, a strong romantic story arc (almost every chapter is opened by quotes from Romeo and Juliet) and a strong criminal thread as well but none of those elements dominated over the others. Overall it reminded me of one Agatha Christie’s novels: everything is revolving around a very old, Anglo-Saxon family of Ashleys and their inheritance, substantial and non-substantial as well. The story is told by Bryony herself – and maybe because of that I have to admit somehow I had difficulties to get immersed in the narration. After a while, though, everything kicked off and there were plenty of elements I liked: an old, a bit dilapidated mansion with financial problems, a bit of history with a whiff of scandal, a maze in the garden, created by a man in love with his wife and, of course, Bryony and her search for the man she fell in love with not knowing even his name or seeing his face. Terribly romantic, right? Well… either that or terribly stupid.

There was also a bunch of problems.

First of all I was surprised the author needed a Gypsy to justify paranormal activities. Old, good Anglo-Saxon blood didn’t seem good enough? Why? I admit the whole ‘Gypsy’ mystique I find laughable but it’s perhaps just me.

Then I wondered why Bryony accepted the link and the voice in her head so willingly. She tried to talk about it with her cousins but she never questioned her own sanity or the sanity of her interlocutor. Family history is one thing but if something like that happens to you it is quite natural to wonder whether you are ‘normal’ and everything is ‘all right’ with you. Bryony was so sure her paranormal abilities were nothing unusual that it made me sometimes a bit uneasy.  Only truly deranged people are dead sure they are healthy.

Then the baddies were pretty obvious from almost the start but, after all, it can be said about many such books so it didn’t surprise me at all. To be honest, my expectation were lowered significantly as soon as I saw that Romeo and Juliet quotes, so fragments of my least favourite Shakespeare play, at the beginning of many chapters. It was suggestive and a bit anti-climatic too. I knew the ending would be pretty tragic and there would be at least two dead bodies. I was proved right. Still the explanation of the title, Touch Not The Cat, being also the family motto of the Ashleys, I liked very much.

My feelings are mixed; this book features some elements I liked but also  those that bored me a bit. If you like the quiet country crimes of Agatha Christie plus Gypsies you might be more impressed. By the way ‘touch not the cat bot a glove.’ is the real motto of the Scottish Macpherson clan, ‘bot’ or ‘but’ meaning here ‘without’. The ‘glove’ of a wildcat is the pad. If the cat is ‘ungloved’, its claws are unsheathed. The motto serves as a warning that one should beware when the wildcat’s claws are ‘without a glove’. It is a reference to the historically violent nature of the clan and serves as a metaphorical warning to other clans that they should think twice before interfering with Macpherson business. 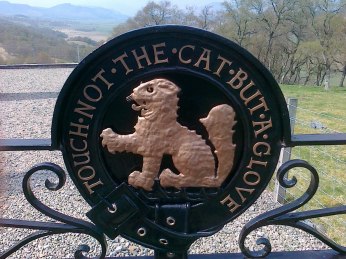 This entry was posted in book review, crime, paranormal, romance and tagged Bryony, Mary Steward, meh, Touch Not The Cat. Bookmark the permalink.

8 Responses to Review: Touch Not the Cat by Mary Steward