An American Tragedy by Theodore Dreiser

Synopsis:
Clyde Griffiths finds his social-climbing aspirations and love for a rich and beautiful debutante threatened when his lower-class pregnant girlfriend gives him an ultimatum. 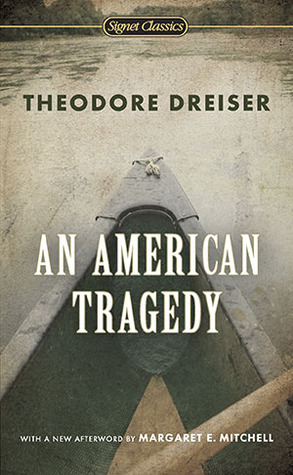 This book is tragic. Not because it describes tragic events with a downfall of the main character and an unhappy ending, but because causes extreme distress to the reader. Even when I was trying to skim, I slowed down to read properly only to realise that I didn’t remember a word of what had happened in the story. The purple prose, the exclamation points, the repetition, the utter dullness of it all, it’s all in there and it’s bad. No, it’s worse.

Despite everything, observing Clyde’s destruction is oddly compelling. He’s a young man who is given opportunity after opportunity to make something of himself, but he never does. He lacks the ambition and the ruthlessness. Clyde Griffiths isn’t a likeable character and he isn’t meant to be, but neither is anyone else in the book. His immediate family is poor and pious and his uncle’s family is the idle rich. Every single one of them places their own comfort well before Clyde’s even when they’re pretending to help him. I especially loved Mrs Griffiths priorities for using the money she was collecting for Clyde’s defence.

Speaking of Mrs Griffiths, Roberta, and every other female character in this book: Is there any evidence anywhere in existence to show that Dreiser met and talked to a real life breathing, blood and bones, woman? Because if he was aware of our existence it doesn’t show on the page. The inherent sexism of the age and that of the author oozes from every word; women are chattel. They may earn their own wages, but they belong to men as does their income.

I don’t have much to say about this book, because as I mentioned, I blacked out for long periods while reading. I just hope that this book is forgotten or if it must be remembered, let it stand as an example of the time it was written in and how far we’ve come since. Or not that far after all.

This entry was posted in book review, classic, crime, read in 2013 and tagged An American Tragedy, The Rory Gilmore Reading Challenge +, Theodore Dreiser. Bookmark the permalink.

5 Responses to An American Tragedy by Theodore Dreiser