It’s hard being a rat, let alone a rat with culinary aspirations. After all the paths of rats and humans should never cross. Still Remy, a small but sympathetic rodent, is convinced he has what it takes to break the stereotypes and follow in the footsteps of a star Parisian chef, Auguste Gusteau, lately deceased. As fate would have it, Remy is currently situated in the sewers directly beneath Gusteau’s elegant but slowly declining restaurant. Fate or…a guidance of the Gusteau’s ghost who’s left some business unresolved and wants to finish it using any ally he can get?

Soon Remy teams up with a young man named Linguini – with little culinary talent but a great propensity for creating havoc . Together, as a team, they are able to create some fabulous dishes, but they live in constant fear that someone will discover their secret and object strenuously to a filthy rat being anywhere near a professional kitchen. When Remy’s passion for cooking turns the haughty world of French cuisine upside down, the rat who would be king of the kitchen learns important lessons about life, friends, and family while questioning whether he should pursue his culinary calling or simply go back underground and return to his life as a pest

A rat which (who?) is prepared to defy his entire tribe, even die, in order to follow a career of a chef. A good-for-nothing boy who finds out all of a sudden he is the heir to a well-known Parisian restaurant. A gutsy girl trying hard to fit in a profession dominated by tough male workers. An aloof, powerful and arrogant culinary critic who will stop at nothing in order to ruin any restaurant not up to  scratch. French cuisine. Paris. Love. Rats. What not to like? And yet my co-blogger Rameau informed me in an e-mail that she hasn’t seen Ratatouille and doesn’t intend to watch it in a foreseeable future. It left me completely befuddled as Ratatouille happens to be one of my favourite cartoons, one to which I return when I need a pick-me-up movie badly. I decided to write the review and present my case – better late than never, right?

Why I like it so much? Mainly because of the plot, as original and fresh as your best organic strawberries. Also because the movie features a bunch of  flawed but vivid characters, none of them too stupid to live. The animation is extraordinary too,  occasionally even breathtaking. The whole package I find so enticing, in fact, that, even as a staunch anti-anthropomorphist, I readily accept time and again the movie’s big ‘oh yeah?’ moments. Yes, my brain hasn’t frozen over yet so I admit it was sometimes difficult to swallow the fact that you get here a talking, fully intelligent rodent which can communicate with normal people and see a ghost of a chef (sic!) without any problems. What’s more that rodent has taste buds similar to humans so it can cook human gourmet food.  Remy is also able to make a celebrity chef out of his hopeless human helpmate, the docile, master-of-disaster Linguini, by jerking his hair from inside his hat. 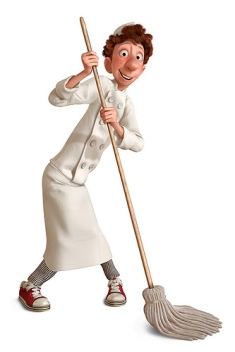 directorial control, not to mention its warmth, detail, intelligence and lack of pretension, that such huge leaps and metaphors (rats=immigrants?)  never obscured its pleasures – not really. I agree that you have to suspend your disbelief almost all the time – the choice of realistic looking rats swarming a pristine French restaurant kitchen is absolutely disgusting and makes the premise of the film revolting when you start to think about it in real life terms. Still it shows that a good scenario, based on an excellent idea, and a brilliant execution mean more than pure logic.

In my humble opinion you cannot overestimate a cartoon which glorifies the value of good quality food; not in times when  a good meal means a hamburger with french fries or a slice of pizza for too many kids and adults. I abide by that opinion even if the same movie is also a not-so-subtle advertisement of Paris and French haute cuisine – two things which really don’t need any advertisement at all.