Review: Inquisitor (A Witch and Wolf novel) by R.J. Blain

I got a complimentary ARC of this one from the publisher – thank you very much! That fact didn’t influence my review in any way. 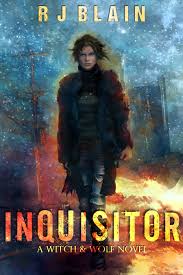 When Allison is invited to New York by her friend and temporary employer, Mark Dupree, and asked  to be his escort during one of many posh Halloween parties she hopes it will be just a splendid occasion to have fun and shop. No such luck – nothing is so easy when it comes to Victoria Allison Mayfield Hanover or Allison Ferdinan as she prefers to be called right now. First of all she is a mix of werewolf, a human and a witch in one person – a very special supernatural being. Secondly, she is supposed to pretend she is Mark’s fiancée in order to fool his Ma, a powerful witch as well, who wants to arrange a marriage for her son in a rather medieval fashion.

When during the party a young woman is murdered Allison knows she’s got entangled into something ominous and nasty – not only because she is in company of different magical creatures but also because she thinks the Inquisition might have been involved. It doesn’t help that Mark’s mother proves to be as mean and vicious a hag as Allison assumed she might be. Then somebody starts murdering Allison’s employees – at least those who share her werewolf affliction. What can be done in order to protect them? Can anybody protect Allison herself?

The novel seems to be a clever cross between urban fantasy and crime mystery – that’s why I forced myself to keep the synopsis very short and rather schematic – it would be easy to spoil you. There are a lot of turns and twists of the plot so if you plan reading the book it’s really better to know less than more. The narration starts rather slowly and then goes straight to hell – I liked it.

I liked also the world build – the witches, shamans, werewolves and the Inquisition somehow complemented each other. What’s more the author avoided infodumps, revealing all the factions and their possible connections slowly during the narration, done by Allison herself in the first person limited voice.

The heroine, a rather old and blasé Alfa female werewolf, was born in the middle of the 19th century and living with too many secrets burdening her shoulders. She was presented in an interesting way, being overall pretty three-dimensional and very likeable, especially that she was officially allergic to canines of all sorts, dogs and werewolves among them. Imagine a woman allergic to herself – old good Sigmund Freud would have a field day with her!

The novel scored additional points because there was no insta-love or insta-lust around, quite the opposite in fact. Allison informed me and her potential suitors several times than pairing and marriage/mating was a very serious business for the weres because once it was done, it was done for life. Keep in mind the fact that werewolves practically didn’t age and could live many centuries so if you chose wrong it would be a disaster indeed.  Accordingly, although there was a whiff or two of romantic interest between Victoria and different gentlemen surrounding her nothing happened, not even a kiss. Queen Victoria would approve.

Don’t get me wrong – the book was highly readable, a real rollercoaster. Still, after a while I felt there was too much action versus character build or, in fact, anything else. Too many bad, violent things was happening to Vicky/Allison in a very short amount of time (about a month? A bit more?) and sometimes I got a feeling that she, even with all her supernatural strength combined with those cool witch powers, couldn’t have coped with that all. And yet she did. That’s somehow my problem with UF novels: too much action turns such tales after a while from improbable to downright silly and then suspending disbelief becomes worse than a chore.

Also the ending felt just wrong, possibly because, in my opinion, there was one twist and turn too many. No, it wasn’t easy to guess the perpetrators of all those were murders but it seemed to me that the author herself decided about their identity in the last possible moment and then simply built the case around it in a rather haphazard way. I don’t want to spoil you so I won’t get into detail; let me just say that, after the final revelation nothing added up anymore, at least not for me.

Inquisitor wasn’t a bad start of a series (?) but it was hardly flawless. I would like to meed Victoria again but I do hope there will be more character develpment and a bit less action in the next part.

8 Responses to Review: Inquisitor (A Witch and Wolf novel) by R.J. Blain