Review: It Happened One Wedding (FBI/US Attorney 05) by Julie James

SHE KNOWS BETTER THAN TO SAY “I DO” After a humiliating end to her engagement, investment banker Sidney Sinclair is done with commitment-phobic men. But when her sister winds up engaged after a whirlwind courtship, she’s thrown in to close contact with exactly the kind of sexy playboy she wants to avoid—the gorgeous best man. She’s stuck with him, for better or worse, until her sister walks down the aisle, but that doesn’t mean she has to give in to his smooth advances, no matter how tempting they are…

BUT HE MAKES IT HARD TO SAY “I DON’T” Special Agent Vaughn Roberts always gets his man on the job and his woman in bed. So Sidney’s refusal to fall for his charms only makes him more determined to win over the cool and confident redhead. Only what starts out as a battle of wills ends up as a serious play for her heart. Because the one woman who refuses to be caught may be the only one Vaughn can’t live without…

Synopsis in a nutshell:

Two sisters – a bride-that-never-was and a bride-to-be, one of them pregnant. Two brothers – a best man and a bridegroom-to-be, both of them in love. Prepare your tissues and boxes of chocolate – a lot of ‘awww’ and steamy sex moments are coming your way. That’s what these books are for, after all.

I loved the cover. The book was a breeze to read despite all these weird wedding preparations (a ceremony rehearsal? seriously? what’s the difficulty after all – walking down an aisle?). There were no stupid mistakes like opening a bottle of champagne with a corkscrew; still dicing the tomatoes left me puzzled – perhaps they grow cube-shaped tomatoes in James’s America? Anyway I managed to finish it – overall not bad for one of Ms James novels.

Meet the heroine, Sidney Sinclair, a director of a private equity firm in Chicago:

“Her auburn hair fell past her shoulders in a stylish, layered cut. In fact, everything about her looked stylish and put-together, from her ivory ruffled blouse to her sleek gray pencil skirt to the light summer scarf around her neck.”

Correct me if I am mistaken but it seems Julie James uses a checklist to go through heroines. A lissome brunette? Check. A busty blonde? Check. A scrumptious redhead? She hasn’t featured yet so here you go. Mind you no matter what the colour of their hair and eyes is, they are always unfailingly beautiful – there’s no other option available. The final effect is like with these Barbie dolls – the hair and eye colour can change, the hue of their complexion can change but they remain, surprise, surprise, very much alike. 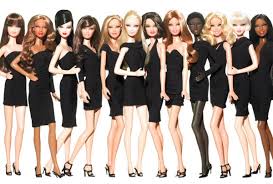 Now meet the hero, Vaughn Roberts, a special agent with the FBI (what else *rolleye*) in Chicago:

“He was tall and somehow managed to look ruggedly sexy, despite the rather conservative dark gray suit and blue tie he wore. Maybe it was the short cut of his thick, brown hair. Or his keen hazel eyes. Or his strong, chiseled jaw with that just-perfect amount of five o’clock shadow.”

Are you hearing any alarm bells? I am. These two are made of plastics – from head to toes – two cheap embodiments of fake Western male and female attractiveness. Trying to be perfect a little bit too hard, that’s where the plastic parts are showing. They might be upscale, high quality plastics but still.

They meet in circumstances as artificial as their good looks – a fluke coincidence, nothing else. Sidney’s younger sister and Vaughn’s younger brother are going to get married in eleven weeks because there’s a bun in the oven and the family of the bridegroom-to-be are staunch Irish Catholics (really? in 21st century?). The happy couple ask our main leads to be respectably their best man and the maid of honor. They do it right after Vaughn hit on Sidney in a coffee shop and she scolded him mercilessly because he seemed too similar to her evil ex-fiancé, Brody – too slick, too foxy. Then Sid learns the dream wedding of her sister is scheduled at the same venue she was supposed to say ‘yes’ herself to Brody. Any more coincidences and I would start to believe in plastic-fantastic flying pigs and such but ok, relax amigo, it’s just Julie James and her upscale romance world – a dream made true.

Everything progresses quite nicely – they kiss and it is an act of epic proportions, they try hard not to date and they find each other irresistible because he is devilishly gorgeous, muscled and fit and she wears pink, revealing dresses and can eat your lips off your face during one make-out session. Oh, and she wears Manolo Blahnik shoes, golden strappy high heels. Who wouldn’t like to date such sandals…

I mean of course such a woman? Who wouldn’t like to date a man who’s been training for a triathlon? And there was also that little tidbit to be shared with the readers:

“Sidney’s eyes widened at the sight of him. Granted, she’d only seen one other penis in the last three years, but this particular model seemed quite . . . impressive.”

Apart from that failure to flesh out the characters properly there were other issues. The action part of the plot left me cold and rather disinterested. For a guy as fickle as Vaughn, the plot wrapped up quickly. His change of heart didn’t feel authentic, and the threat that made him change didn’t feel legitimate and serious enough. I also wondered from time to time why everyone has to be so unfailingly successful in Julie James’s books?  It seems there are no ‘broken’ characters for her. Bad luck – I like ‘broken’ characters the best.

A fairy tale about a sex-on-legs playboy insta-reformed and dragged to the altar by the most beautiful equity princess in the world – same old, same old. Not my read, not my author, not my story.

I was kindly borrowed this book by one of my more sadistic Internet friend – thank you very much I guess!

6 Responses to Review: It Happened One Wedding (FBI/US Attorney 05) by Julie James