Rameau’s note: We received review copies of Brianna’s Bewitching and The Binding of Adara from the author. I chose the novella because I like novellas.

The Witches and Warlocks of Los Angeles series is a blend of paranormal and contemporary romance, with a twist of science fiction.

It’s 1977 and Brianna Marston is a feminist finishing up her final university courses. She’s a little bit wild, but isn’t that what being young and free is all about? Jack Ross never does anything without a well-thought out plan. On track to make detective within the year, he’s lined up a perfect woman to be his wife and raise their children. Then one unruly, mouthy blonde lands in his arms, disrupting all his carefully-laid plans. 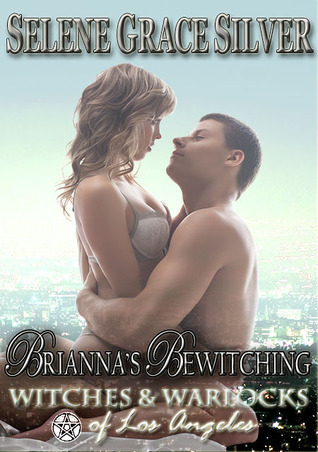 “I cast a reality-shifting spell last night to me. If it messes up a current relationship, I apologize. I fear I might have caused another guy’s death too. But if we get it on, it will have been worth it, right?”

Jack Ross is a cop watching the protesters when he sees a twenty-year-old buxom woman, Brianna Marston, taking off her shirt. He decides to intervene and is assaulted by braless breasts. This, ladies and gentlemen, is the novella’s meet cute. It is followed by an assault, kidnapping, and some really bad sex, not necessarily in that order.

Switching between Jack’s and Brianna’s point of views, the author tries to round all the corners on a well trodden path to Tropeville. In doing so, she manages to alienate me completely while stripping the wonderful set up from it’s magic. Yes, magic. While Jack keeps referring to Brianna’s witchiness, she is, in fact, a witch and to blame for all this.

Brianna casts a spell, which has unintended consequences like killing her wonderful boyfriend. You read that right. She casts a spell to have sex with a man, who cuffed her, carried her like a sack of potatoes, threw her in the back of a police cruiser, kidnapped her, and physically assaulted her brother. Not to mention of after seeing the fear in her eyes while she’s cuffed and lying at the back of that police car, he continues to touch her. Did I mention he sent his partner away and they were alone for this?

What makes it even worse, if that’s possible, is that Brianna has long internal monologues about how controlling and abusive her warlock father is. She thinks about how she wants to stand on her own feet and fight for equality for all women (white only is implied), yet she’s frigid without the touch of a controlling abusive cop who only wants a meek housewife to tend to his needs.

The sad thing is, this novella is set in the 1970s and makes several mentions of women’s right marches. I even had the briefest moment of hope that the hero of this book wouldn’t be a misogynistic alphahole, but a lovely ally to all those working to achieve equality. For a a short while I could see a wonderful new trend taking over the romance genre.

I’ll just have to hope someone else makes it happen.