Review: Riding in Cars with Girls by Evangeline Jennings

I got a complimentary copy of this collection from the author (I guess) in exchange for an honest review. Unfortunately I’ve lost all the e-mails connected to it so if I twisted any of the facts a bit it is all my fault. 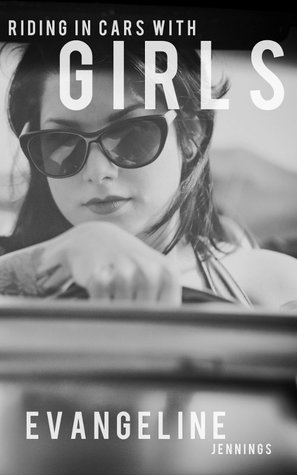 The book consists of six novellas, most of them narrated in the 1st limited voice, sometimes with one POV, sometimes with two. They feature six different scenarios but with three common topics: girls in trouble, girls in love with their cars and themselves. There will be blood,  sex and shooting. Also all novellas feature some kind of homoerotic/lesbian relationship so be warned – it is definitely adult material. Now my short synopsises and reviews of all the novellas, one by one.

A small town cocktail waitress. A glamorous stranger behind the wheel of a stolen muscle car. A raging forest fire. What could possibly go wrong? Everything.

I suppose I liked this one the best. An unknown narrator tells you the story of Dorothy and her black and scarlet Firebird Trans Am. She stopped in one of those small American outback towns in the middle of nowhere and instantly created a sensation, drawing attention of boys and girls. Soon it became clear she wanted more than just a bit of fun. Still she got more than she bargained for. It was a very noir story and the ending threw me out of balance but I loved the dynamics between the girls.

A high class hooker fucks a Mafia Don to death and the fallout forces an undercover Fed to make the toughest call of her career. Should she do her job or the right thing? Or maybe both?

It was more than ok apart from the ending, which was too violent and nasty. Bex, a security officer working for a private company, lets in a luxury call girl, Ruthie, ordered by her employer, a mafia boss called Santoni. Santoni’s ‘fun and games’ evening ends with his sudden death; Ruthie escapes, knocking Bex out but not killing her. Soon enough it becomes obvious that Ruthie is something more than an ordinary escort and Bex is not your average security officer either. Both girls are in a huge mess together but it seems they have enough brains to outwit their opponents. Still will they trust each other and cooperate?

After killing her husband Alex is doomed. Nikki’s along for the ride with some problems of her on. Together they try to escape justice and mafia hiding among picturesque fjords. Still nobody can run forever…

The story of Alex saving a young woman called Nikki from her owner, pimp and lover, Goran, is told in the third person narrative – an exception to the rule. Both girls escape Malmö in Sweden in a stylish Porshe Alex has taken from her hubby and then they tour the entire Scandinavia and half of Europe. I liked this one almost as well as Firebird. The author not only proved she knew her maps and such ‘exotic’ countries as Finland or Latvia, but she also didn’t hesitate to make Alex a closet transvestite, looking for her real identity. It was an original and interesting twist.

South London’s finest teenage car thieves stake their lives on an illegal road race. There will be blood and burnt rubber.

Two fast and furious British teenagers aged just 16, Wendy and Helen, take part in yearly Scumball Rally– a completely illegal event which every participant must drive a stolen car. Wendy is deaf-mute but also a driving genius. The girls compete first on crowded streets of London and then elsewhere; they have to drive at least 500 km a day. Both are sponsored by a shadowy millionaire, Skoudis, who places a bet on them. They mean to win – they want to prove they can drive better, faster and longer hours than men. It is especially challenging because they are clearly perceived as underdogs. For two teen girls the heroines behaved in a very adult, cunning manner, making the whole premise a touch too unbelievable. Especially their latest confrontation with Skoudis seemed to me completely over the top. Oh well. Still the race was good.

A widow hunts her ex-husband’s killer across America. Route 666 will be one part of her journey.

A woman is following her ex’s daughter, Katie, who’s killed her daddy dearest and is on the run. Frantically they cross almost the whole American continent, breaking so many laws that it seems they are in a kind of contest, trying to win ‘The Badass of the Year’ title. The novella was shorter than the previous ones and rather brutal; the ending packed a wicked punch. Still I liked it – if it wasn’t that bleak I would call it easily the best story in the book.

Two young runaway lovers with a steep price on their heads take a savage roadtrip through every kind of crazy. Can you outrun your destiny? They think they might try.

Two girls are escaping their past. One of them was involved in every kind of racket imaginable as her granddad, allegedly respected businessman, was also a mobster. Will they manage to do the vanishing act? Will their bond survive the frantic run for their lives?

This one I liked the least of all; in fact I skimmed like half of it. Perhaps I was already tired, perhaps the BDSM-flavoured sex between two main leads, Winona and the unnamed owner of the title car, didn’t do it for me. Perhaps it was the ending – calling it bleak would be like calling a thunderstorm a drizzle. There was too much blood, murders, deception and grief. It felt like a very dark coda to the whole book.

I am not a fan of short stories; still 5 out of 6 novellas from this book worked for me more or less fine. I guess it proves that 1) Ms Jennings is a very skillful author who knows how to  tell a riveting story and flesh out her leads even in short novellas 2) I am a noir story girl through and through 3) this collection is worth reading. BTW I love the cover art.

10 Responses to Review: Riding in Cars with Girls by Evangeline Jennings