Review: The Golem and the Jinni by Helene Wecker

I found this one while reading a review published on Carole Rae Random Ramblings blog – thank you very much, Carole and Blodeuedd for featuring it!

Chava is a golem, a creature made of clay, brought to life by a disgraced rabbi who dabbles in dark Kabbalistic magic. When her master and her husband who commissioned her dies at sea on the voyage from Poland, she is unmoored and adrift as the ship arrives in New York in 1899. Without proper papers she sneaks away and tries to survive on busy streets of the Big Apple.

Ahmad is a jinni, a being of fire, born in the ancient Syrian desert. Trapped in an old copper flask by a Bedouin wizard centuries ago, he is released accidentally by a tinsmith in a Lower Manhattan shop. Though he is no longer imprisoned, Ahmad is not entirely free either – an unbreakable band of iron on his wrist means he must stay in human shape all the time. When he meets Chava they recognize each other as non-humans instantly. What’s more Ahmad feels that they both might share something more than just a common trait of oddness.

Still will their unusual  friendship help them to break free?

Oh guys, I haven’t had so much fantastic fun (pun intended) since I read the Barthimaeus trilogy by Johnathan Stroud (here is the link to my review of its first part) and it is one big, fat compliment, believe me. I think I do love jinnis and the golems in my fantasy fiction. Still while Stroud’s books were very clearly aimed at YA audience, maybe even younger, The Golem and the Jinni is more adult and more serious too, with a bit of romance and philandering added to the plot.

Chava is a female form golem I haven’t met before in fiction. According to Jewish traditions no anthropogenic golem is fully human; still Chava not only possesses 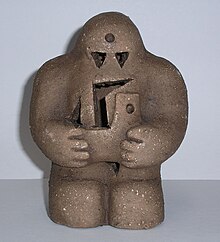 more than average intelligence and even a kind of conscience, she also looks relatively well to pass for an ordinary woman, perhaps not the prettiest woman around but still. If you want to know how exceptional it is, have a glance at the photo on the right – that’s how your average golem might look like. Neither especially handsome nor human I have to say ;p.

Chava is rather unlucky when it comes to her masters and protectors – her first master, the man who ordered her creation and paid for it, dies soon after animating her and elderly Rabbi Meyer who takes care of her in New York is ill so he also dies after a while. It makes our golem profoundly unhappy as she needs a close bond with somebody. She was simply created that way. Here enters the Jinni, as different from Chava as a chalk from cheese. Jinni would love nothing more than to be completely, totally free. He used to roam the Syrian desert in a form of his choice but was captured because of curiosity and recklessness (yeah, a Beduini beauty was involved as well). Now he cannot change form and roam much although the city of New York does provide him with a bit of entertainment: there are human women to be seduced and interesting places to be visited. Still it’s not a real life for a jinni when you cannot transform into a jackal or go meet your pals as a spirit ;p.

Both Ahmad and Chava are drawn to each other and fascinated by their differences. They quarrel a lot but soon enough it becomes clear they understand each other very well and long for each other’s company. After all they have to face the same challenges while trying to blend in among ordinary humans. They will also need each other when facing final destruction, a threat coming from the man who knows their nature better than any mortal. And here enters Yehudah Schaalman, a.k.a Joseph Shaal, the creator of Chava and SPOILER highlight to read or skip: the latest incarnation of the wizard who once captured and imprisoned Ahmad. Joseph/Yehudah was a seriously messed up individual but also the most three-dimensional human being featured in this novel and the one I liked the best.

Now a bit about the narration style and such. It is the first novel of Ms Wecker and, unfortunately, it made itself felt. I had an impression that a more experienced writer would made two novels out of such an amount of material or one novel and two- three accompanied novellas. There are as many as six different POVs, maybe even more, and despite the fact that they all merge near the end neatly and do make sense together, they also tend to make you feel overwhelmed with details concerning different lives of different characters. For most of the novel you don’t see the point of being told the story of tragic life of  Ice Cream Saleh or the ups and downs of Yehudah Schaalman; still, in this case being patient definitely pays off.

The last remark: the author uses the word Poland several times and calls Danzig (now Gdańsk) a Polish city. As much as it warmed my heart I must say it is a historical inaccuracy. At that time (the beginning of the 20th century before the WWI) Poland as an independent country simply didn’t exist and Danzig was just a big Prussian port.

A great historical fantasy novel with original characters and an inconclusive ending (but no cliffhangers). I do hope for the next part soon – I would love to revisit Chava, Ahmad and New York at the beginnning of the 20th century. BTW the cover art is lovely too!

12 Responses to Review: The Golem and the Jinni by Helene Wecker