Posted on November 6, 2015 by portiabridget

With this review I am officially starting a series of November movie horrors which I am going to watch and present here once a week – usually closer to the weekend. If you like horrors do visit regularly – maybe you’ll want to watch one of them too! 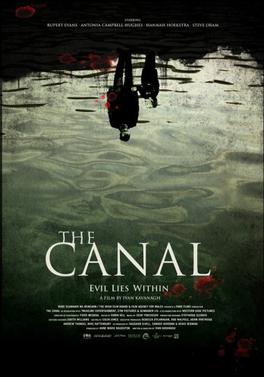 “The Canal 2014 Irish horror movie poster” by Source (WP:NFCC#4). Licensed under Fair use via Wikipedia –

Sitting in an empty theater, a film archivist watches the grainy footage that will be his undoing. So far David Williams (Rupert Evans, handsome but bland) and his wife Alice (Hannah Hoekstra, a gorgeous actress) have been a perfectly happy couple with an adorable little son, Billy. They live in an old but stylish semi-detached house. One day David finds out his home  was the scene of a ghastly turn-of-the-century murder. At first he dismisses it as ancient history – who cares what happened in 1902? Still somehow the sinister murder ripples into the present and casts a shadow over life as he knows it.

When a looming secret shatters his marriage, David can’t help but suspect the dark spirits of the house are somehow involved. In his drive to unveil the shadows hidden in the walls, David begins to descend into insanity, threatening the lives of everyone around him.

‘Atmospheric creepiness’ and ‘slow-go action’ – if you like these two features in your horror this is your movie. I admit I do like them and I might add this one also sticks out with a very nice camera work and some truly brilliant scenes which were not only atmospheric but also artistically pretty. Really you don’t need tons of ketchup and rubber flesh cadavers to make a good horror, a simple everyday story works as well – if not better.

Here we have an average, middle-class family: a beautiful wife, clearly a breadwinner with a posh job somewhere in the city, and her a bit plain but respectively sweet husband, an archivist. They buy a haunted house without being aware of it and for five long years their life might be called mundane but never dangerous. They have a kid and soon are joined by the compulsory young and pretty nanny. Still old ghosts of a murdered family are just biding their time. Right after David discovers their cosy home was a crime scene and his glamorous wife is not exactly faithful (with her looking like a super model who would guess it, right? *snickers*) all hell is let loose. Is it real or is it just his imagination?

It might sound ordinarily but it was a bit scary. Still there were only two seriously disgusting scenes as far as I am concerned: one set in the worst public toilet in Dublin (do you remember Trainspotting and the worst toilet in Scotland? I don’t doubt it was her Irish sister) and the other right near the end, in the canal (not spoiling).

Any weaknesses? Unfortunately I spotted two of them quite easily. First of all the investigation into the disappearance of Alice was conducted in a very unprofessional manner. Imagine that: a police crew find the body and, after the post mortem, the coroner concludes that there are no traces of ‘foul play’ so David, very unhappy, is left off the hook. Then, all of a sudden, the leading detective, clearly very pleased with his own cleverness, announces they’ve found a hammer in the canal with David’s fingerprints on it. WTF? Why had they looked for it at all if there were no traces of violence or trauma on the body of the victim? Is Dublin police so bored they look into a murder case which, officially, was closed? Another question: how come a set of fingerprints managed to survive several weeks if not months of immersion in a deep canal?

My other problem was with the ghosts/zombies haunting David’s house. I couldn’t understand why they had to wait five years to activate their nefarious plans and make a grab for Alice and the rest. Very patient ghosts, don’t you think?

Not a bad scary movie, definitely better than your average Hollywood production, with great frames and a good set of actors. Still it was hardly perfect. I suppose it didn’t delve deep enough into the potential imagery and themes, making things feel more shallow than I wanted them to be. And it had two serious logic flaws or so is my opinion. Still I don’t regret watching it.

4 Responses to Movie review: The Canal directed by Ivan Kavanagh (2014)