Posted on November 13, 2015 by portiabridget 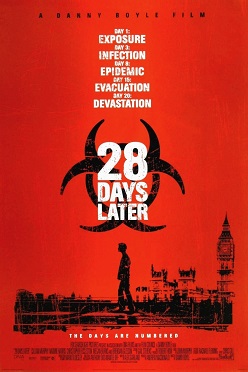 “28 days later” by Source. Licensed under Fair use via Wikipedia

Animal activists invade a laboratory with the intention of releasing chimpanzees that are undergoing experimentation. They don’t know that the animals have been infected by a new virus that causes rage. After ignoring the pleas of a scientist on duty the activists open the cages – as a result the virus gets out and spreads like the plague.

Twenty-eight days later, our protagonist, Jim (Cillian Murphy), wakes up from a coma, alone, in an abandoned hospital. He begins to seek out anyone else but he finds London completely empty. After wandering for hours he spots healthy humans – and plenty of infected ones. His life is saved by Selena (Naomie Harris) and then they join a father-and-daugher team who want to go to Manchester where the US Army unit allegedly helps to secure a small area for the healthy survivors. Of course not everything goes to plan.

Another zombie movie this week; still it doesn’t concern one family living in a historic building but the whole nation. Or even nations, taking into account how many minorities inhabit London.

When the cycle courier Jim awakes from a coma after a serious road accident he doesn’t even imagine that he had missed a lot – like the death of his parents and the end of his world. He gets some inkling when, hungry, cold and miserable, he walks into a church only to find a heap of dead bodies and some undead ones who (which) have turned into blood-thirsty, brainless monsters.When he is rescued by the arrival of fellow survivors, Selena and Mark, he finds out that from now on he has to kill or be killed – the infection is transmitted by blood and overwhelms the victim with a murderous rage. What cheer.  Their only hope of survival may lie in the hands of a Manchester group of soldiers, as they claim to have the “answer” to infection and invite any survivors to join them at their blockade. Faced with no practical alternative, the group sets out northwards, unaware that the worst is yet to come.

I liked this one but I generally like Danny Boyle’s style so you shouldn’t be surprised. He can make you care about the characters he presents and that makes 28 Days Later effective and sets it apart from other thrillers. Apart from that the images of a wasted, empty London were both creepy and persuasive and lovely. To shoot in such locations devoid of traffic and members of the public you have to be very organized I suppose.

Still I have to add the film was at times a bit too twitchy and annoying for my liking. The sudden ‘awakening’ of a coma patient was closer to fiction than to reality. Also the theory behind the infection felt a bit far-fetched and the ending was hardly coherent with the rest of the story. Still if you like your zombies I suppose you should watch it and if you wonder what a beautiful city London would be without all these buses, people, cars and cyclists  this movie offers you a unique occasion to confront your imagination with real imagery.

Not a bad movie for a genre which has been stagnated for a significant amount of time,with a much more raw and natural look than the terminally polished soft-focus Hollywood fare.