Posted on November 20, 2015 by portiabridget 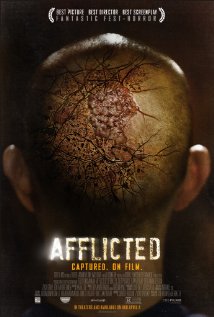 “Afflicted 2013 movie poster” by Source (WP:NFCC#4). Licensed under Fair use via Wikipedia

Childhood friends Clif Prowse and Derek Lee have decided to venture all over the world to film their travel web series “Ends of the Earth”. Derek is making the trip in spite of his doctor’s advice, as he has an AVM, which could cause his death at any moment. That fact makes him only more determined – carpe diem and all that jazz.

Clif and Derek stop at Paris to meet with old friends currently on tour for their band. After their initially uneventful journey, not counting a parachute jump or two, Derek picks up a girl by the name of Audrey Later that night Clif bursts into the hotel room they rented as a prank only to discover a bleeding and scratched Derek and no sign of the lady. Derek insists he doesn’t remember anything and they should continue on to their trip because he looks worse than he feels. Clif reluctantly agrees.

Upon getting to Italy, though, it is clear that something bad is happening with Derek. He passes out and sleeps for an entire day. Clif awakens him the next afternoon for lunch, in which Derek shows an aversion to sunlight. Upon getting to the restaurant, Derek hungrily devours his pasta dish before projectile vomiting it out and stumbling back home as sick as a dog. Later, at a vineyard, Derek has an extreme reaction to sunlight and is forced to flee inside a random building . Back at the hotel room, Clif attempts to calm Derek down, only for Derek to explosively destroy a stone wall with his bare hands.

What’s happening to him? Why doesn’t he want to seek professional help? Would Clif be able to help him and make him return to the States? Will they manage to finish that movie?

This film is unique and that’s why I wanted to watch it. It was written and directed by… Derek Lee and Clif Prowse as their feature film directorial debut.  Lee and Prowse also star in Afflicted playing…two friends who want to make a movie while traveling the world. Such a simple idea and so original – it’s really difficult not to be impressed!

Now imagine two famous, mainstream directors, say Quentin Tarantino and Francis Ford Coppola, entering hand in hand one of the biggest Hollywood studios and announcing they want to make a movie roughly about themselves, starring themselves, with just two-three cameras which will be operated by themselves. The movie will be featuring their journey around the world they’d been itching for…I don’t doubt they would be quietly carted to a private and very discreet mental institution ‘to enjoy more time with their respective families.’

Fortunately nowadays such projects are completely possible and doable. So… two relatively young Americans go to an epic journey around the world – the old Europe, Asia, Russia, Australia, you name it. They have money, they have a lot of video shooting equipment, they even have some previous experience when it comes to travelling. What they lack is the basic knowledge about vampirism which can be found even in most primitive PNR books – sad but true. Yes, dear Readers, that’s what happens when you are ridiculously ignorant of vampire myths in fiction. If those two guys read books or at least watched movies, even those silliest ones, about vampires they would roughly know what to expect and what to do. Ignorance doesn’t pay!

Seriously, for me it was the weakest point of the whole premise. Haven’t they heard about ‘Twilight’? ‘Vampire Diaries’? ‘Drakula, Told or Untold’? ‘Buffy the Vampire Slayer?’ The Sookie Stackhouse series? The Anita Blake series? Is it possible to live under such big, thick rock that you cannot recognize the symptoms of vampirism? I don’t think so.

Ok, let me continue. One of them becomes a vampire (not a big spoiler, really). The second one has some serious troubles because of it (I don’t want to spoil you so I won’t say anything else it is already laughingly predictable and obvious what might happened to poor Clif).  As you see the whole story is rather simple and completely derivative of countless previous vampire flicks so yes, a word like ‘cliche’ came to mind many times. However it is presented in an original way – almost from the first person point of view and almost without any voice-over narration, imagine that. Both directors and main leads displayed a lot of inventiveness and technical skills!

Still the movie suffers from some serious lapses in logic -e.g. why the new vampire can’t see in the darkness even though he is allergic to light? Oh, right, because the recording equipment must work till the very end. ;p The movie-shooting continues even when one of the guys changes into a different species of a kind. I admit it, there were some boring moments and such a formula didn’t always win me over but overall it was fresh, interesting and definitely worth watching.

Not scary in the slightest but still a great film which impressed me a lot. I haven’t been able to say/write something like that about a vampire movie for a very long time so yes, I recommend it if you have nothing against ‘found footage’ formula and some sketchy montage.