Posted on December 11, 2015 by portiabridget 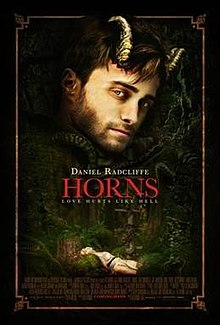 nd murdered. After all they quarreled in public the same night and she broke up with him. Despite his declarations of innocence, he is shunned by the community, and only his childhood friend and lawyer Lee (Max Minghella) seems to believe him. After a vigil led by Merrin’s father, who believes Ig to be guilty, Ig drinks heavily and wakes up with a pair of horns protruding from his head. Horns have a direct influence over people around Ig – they make them reveal their most shameful yearnings and secrets. Will Ig be able to find out who murdered the love of his life?

I read and liked ‘Horns’ by Joe Hill, a novel this move is loosely based on, so, by default, I was sure the movie would leave me seriously displeased. Well, the situation wasn’t that tragic, mainly due to the wonderful scenery and Daniel Radcliffe who proved that he knows how to act and he can even speak American English if he really has to. I pretty much remembered the story line so I could focus on visuals and they were nice indeed. My main problem? At nearly two hours, “Horns” is about 30 minutes longer than it needs to be, maybe even more. How long can you admire the scenery?

Overall the book seemed both funnier and more audacious in its premise. The movie, on the other hand…well, the movie is neither here nor there: not quite a horror film, not quite a whodunit, not quite a comedy, indeed not quite much of anything, except a stuttering attempt to bring Joe Hill’s source novel to the screen. Heavily diluted to add.  The director wasn’t even tempted to answer some questions left by the author untouched ( like why Ig was chosen at all out of all more or less bad men inhabiting his town and who or what exactly chose him)  and the ending made me truly disgusted.

If you like Daniel Radcliffe and you want to watch some bland horror with comedy accents then perhaps you might appreciate this one better than me. Given a choice between reading the book or watching the movie I would of course recommend the book – nothing’s changed.