Posted on February 19, 2016 by portiabridget 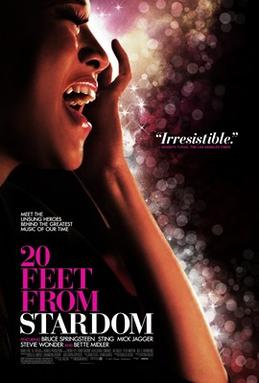 “Twenty Feet From Stardom poster” by Source. Licensed under Fair use via Wikipedia –

I watched this one because Tasha/heidenkind mentioned it on her excellent blog, Truth, Beauty, Freedom and Books – thank you very much again, my dear!

A documentary about backup singers who usually stay in the shadows of big stars even though they are more often than not equally talented, sometimes even more. Their voices bring harmony to the biggest bands in popular music, but we’ve had no idea who these singers are or what lives they lead, until now. Apart from stories of different singers the director also shows a big chunk of the history of pop, focusing of course on the 20th century.

First of all let me tell you that the voice of Lisa Fischer will stay with me for good. She is so incredibly talented that the first time I heard her sing I was left speechless. Believe me or not she sounds better than the best, and I mean here the very best, riffs of an electric guitar. She is incredible. If she was a big, rich and famous super star, which she certainly deserves, the world at large would be a much fairer place. Unfortunately it isn’t.

I did love that movie, I enjoyed myself and I learned a lot it but I don’t know whether I would like to rewatch it. On the one hand the movie was full of great songs, mostly oldies-worldies, and interviews with singers, mostly women, with great personalities. On the other hand it was depressing because very few of these incredibly talented individuals with great voices and even greater sense of humour managed to ‘float’ in the world created by the American music industry. Notably none of them made a big career most of them deserved – it seems the big label bosses firmly believe that ‘once a backup singer, always a backup singer’ -after some time you can turn into a house cleaner or a teacher but never ever into a pop star. It made me very, very sad.

It also emphasized the brutal rules imposed on those who want to ‘make it’ in the entertainment business. It is not enough that you are young, pretty to look at, disciplined and willing to work really hard. It’s not enough you got your musical education, sing like a nightingale and dance like Ginger Rogers. It’s not enough you explore even the slightest opportunity to show your talents to the wide public. In fact more often than not these factors are of secondary importance. It’s all about knowing the right people and finding a good ‘sponsor’ in the right moment. You must have a lot of luck or, alternatively, a lot of contacts and some luck too. If you are a poor outsider nobody cares about then perhaps it would be wiser to stick to your ordinary life and sing in your bathroom- sad but true.

A great documentary showing some history of 20th century pop music from an original angle. It’s won a lot of awards, Best Music Film among them. It is so completely worth watching, especially if you like the topic but be prepared for that sinking feeling in your stomach near the end. No, despite the gorgeous poster it is definitely NOT a mood booster.

9 Responses to Movie review: 20 Feet from Stardom by Morgan Neville