Posted on February 25, 2016 by portiabridget

1887. Young Edith Cushing, the daughter of a wealthy American businessman, Carter Cushing, is visited by her mother’s ghost. The apparition warns her “beware of Crimson Peak”  but the girl doesn’t understand it. Fourteen years later. Edith, a beautiful woman of marriageable age, becomes a budding author who prefers penning ghost stories to writing romance novels that her editor wants. One day she meets Sir Thomas Sharpe, an English baronet who has come to the United States seeking investors, including Edith’s father, for his clay-mining invention. Disdaining privileged aristocracy and unimpressed with Sharpe’s prototype and previous failures to raise capital, Cushing rejects Thomas’s proposal. Edith notices that Thomas and his sister, Lucille, wear expensive but outdated and somewhat-frayed fashions. Shortly after, Edith once again is visited by her mother’s spirit bearing the same warning and the same evening Thomas invites her for a ball and wooes her openly. Still Edith’s childhood friend, Dr. Alan McMichael, disapprove.

Dancing with a wax candle and no drips? Hmmm…

Mr. Cushing hires a private detective to know who his daughter is dealing with and soon enough he uncovers unsavory facts about the Sharpes. Of course he never dreams of sharing those with his lovely daughter. Mr. Cushing confronts the siblings and bribes them into returning to England. As Cushing insisted he do, Sir Thomas abruptly and cruelly ends his and Edith’s relationship, but the next morning, he sends her a note explaining his actions.

Not long after Mr. Cushing is brutally murdered in his bathroom, though his death is ruled accidental. Edith, now a wealthy heiress, and Sir Thomas eventually marry and return to England. They arrive at Allerdale Hall, the Sharpes’ dilapidated mansion, which sits atop a red clay mine. As Edith settles in, she finds that Lucille acts somewhat cold toward her while Sir Thomas remains physically distant. Edith is left confused and uncertain by their behavior. What it is caused by? What secrets hides the mansion and why the siblings lie to her all the time?

If you want to watch a blood-drenched, Gothic fairy tale for adults, something  straight from the Grimm brothers book, look no further. This movie will show you it all: a lady in white, a lady in black, blood-red ruby, ghosts, a haunted mansion, perversion, greed and monsters hidden behind lovely faces.

Every Goth family’s dream – a mansion with ghosts

Mia Wasikowska plays Edith Cushing, a bluestocking daughter of Buffalo, NY industrial pioneer Carter Cushing (Jim Beaver), from whom Sir Thomas Sharpe (Tom Hiddleston) an impoverished baronet, seeks investment for his revolutionary mining machine. Cushing is unimpressed, but Edith is smitten by Sharpe instantly. Well who wouldn’t – the guy sees beauty in her fiction (“the ghosts are just a metaphor”) and dances a waltz with her like a pro, snubbing another girl in the process. Small wonder that, after a whirlwind courting, he sweeps the innocent Edith from the cultured and electrified modernity of New York to the drafty, moaning stones of his crumbling Lake District ruin of a mansion.

The mansion comes in a 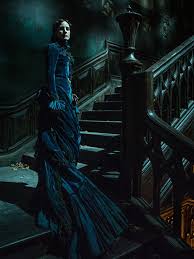 package with your obligatory cluster of dead trees, skeletons in the closets and apparitions in the bath. Noblesse oblige, even if from now on the new Lady Sharpe is practically left without any service. I did wonder how a rich NY socialite managed all on her own, without a butler, a maid and a cook. Who washed her clothes? Who combed her long, blond tresses? Oh wait, maybe her late daddy had sent her to one of those survival courses for American heiresses. Anyway the fact is that she had to eat and drink whatever her creepy sister-in-law brought her. Allerdale Hall was a lot like a latterday House of Usher full of “shadows, creaks and groans”, with blue-green walls, locked rooms, a nice, big hole in the roof and forbidden basements (“never go below this level”; I almost wanted Mia to answer: “sure dude, I’ve heard that one before. Bluebeard anyone?”).

I did like the plot at first and the set of characters, maybe apart from the good doctor who wanted to save the main heroine but had somehow forgotten his white horse. Or a weapon for that matter. How silly you can be, Alan dear: going after known murderers without at least a pistol or a knife? Even the pristine white snow turns scarlet at the mere mention of those two and you rush in with your bare hands? As you see after a while (so approximately one third of the movie) I started to notice incongruities which means that the story’s magic wore off pretty quickly. 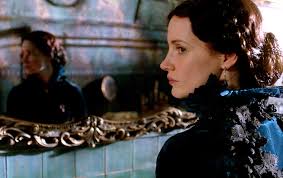 Ok, no matter. As I said this movie is a fairy tale for adults; forget the logic, focus on splendid visuals and you might think that Mary Shelley and Edgar Allan Poe would have a field day watching this one, especially as the main heroine is an aspiring writer who happens to believe in ghosts. Still I couldn’t help wondering why her dad, murdered so cruelly before his first morning coffee, didn’t pay Edith a visit as well, if only to tell her who it was that smashed his skull in. Maybe he was too down-to-earth to be turned into a ghost or he was simply too rich to be considered worthy, who knows.

A Gothic romance fairy tale for adults with a feminist bent – perfect, I suppose, for your Halloween if you observe it. If you read and liked The Fall of the  House of Usher by Edgar Allan Poe, Rebecca by Daphne du Maurier or at least Jane Eyre by Charlotte Bronte you should watch it.