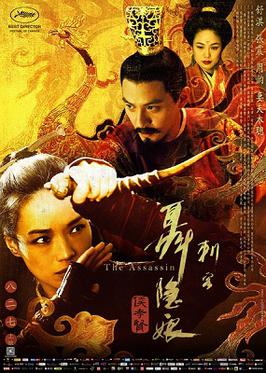 Set in ninth-century China during a time of unrest that would eventually lead to the decline of the Tang Dynasty, “The Assassin” tells the story of Nie Yinniang (Shu Qui), a daughter of a mighty general. She was kidnapped (?) at a tender age of 10 by Jiaxin (Sheu Fang-yi), a nun who trained her to become a brutally efficient assassin specializing in killing corrupt government officials. Alas, Yinniang is not quite as ruthless as she was supposed to be:  when she confronts one of her targets and finds his young son in the room with him, she finds that she is unable to do the deed and lets him live.

This act of mercy sends Jiaxin into a rage, and she devises a plan that she believes will force Yinniang to do her duty and divest her of the misplaced sympathy. Yinniang is sent to Weibo to kill the governor, Lord Tian Ji’an (Chang Chen), and plunge the region into chaos. This is a bit tricky for Yinniang: not only Lord Tian is her cousin but also before her disappearance, she was supposed to  marry him one day, creating a union that would have helped bring lasting peace between the region and his court. Of course, Yinniang cannot bring herself to kill Lord Tian, though she does perform a series of brief ambushes designed to alert him to her presence. How will she manage to weasel out of that tight corner? Well, nothing is difficult to a female ninja assassin, right?

Do you like Asian martial arts movies set in historical times? Vibrant fantasy fairy tales like Crouching Tiger Hidden Dragon directed by Ang Lee? If you answer ‘yes’ then The Assassin is not a movie for you.

The Assassin is adapted from the 9th-century wuxia martial arts novella by Pei Xing. It is also one of the first tales which feature a female main lead. Hou allows the story to reveal itself in a deliberately slow and occasionally digressive manner that prefers having characters recount their stories directly, rather than streamlining the plot threads with flashbacks and other tricks. For those not used to this manner of storytelling, especially in the context of what is supposed to be a ‘proper’ martial arts narrative, “The Assassin” may prove to be difficult to digest. Once again it should be stressed that the story is confusing; for example personally I couldn’t decide whether the main heroine was actually kidnapped or deliberately given by her father to that diabolic nun. Or when exactly she had enough time to fall in love with her cousin, what, with her being taken from home at 10 and then schooled to perfection in martial arts in all those nunneries far, far away. My guess is that the movie might make a lot more sense upon a second viewing or after some background reading.

Anyway don’t let the title, trailers and posters manipulate you into believing there will be much action here or it will be backed by a nice, more or less linear story easy to understand. Believe me – all the action bits barely fit the trailer I am featuring below. The rest of the movie is slow-moving, with the narration jumps and a  lot of scenes with the actors standing still, just looking in the distance, at each other, listening or being taken care of by their servants. Having a bath or reading poetry – truly gung-ho, isn’t it? The fog swirls above the river and in the mountains, the birds are calling…all very nice, scenic and poetic but such are not frames an action movie usually features. And they last, and last and last, up to a minute or longer…add to that beautiful indoor scenes with super-interesting backgrounds full of fluttering, diaphanous curtains and lovely objects of art – definitely not something you would expect from a ‘wuxia’ fiction. I admit after a while I felt bored; however if you like slow movies, the ones which are able to hypnotize you like a slow-flowing river, it might be up to your alley.

A surprisingly demanding and difficult movie, especially for a non-Chinese viewer. Even though I admired it, I felt unmoved by the story because of its obscure quality and I couldn’t wait for a conclusion of a sort. I suppose without doing your homework, you will find some bits of the narration boring and a bit impenetrable. Mind you it is based on a very ancient text, 9th century nothing less. Still I think it’s worth the effort of re-watching, especially that now I know what to expect.

11 Responses to Movie review: The Assassin (2015) directed by Hou Hsiao-hsien