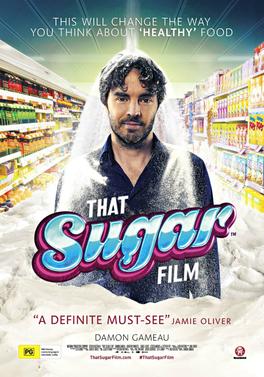 sugar. He didn’t complain.  Now he embarks on an experiment to document the effects of a high sugar diet on his healthy body. 60 days of eating your ordinary, supermarket food  won’t kill you, right? Or maybe you shouldn’t be so sure?

Damon is highly motivated – his wife/partner is pregnant and he wants  the child to follow the best dietary rules possible; it means he also wants to set proper standards as a dad. After all shops around the world are full of sweet kids’ snacks and goodies; one day his lovely little daughter might ask: ‘daddy, is sugar really as bad as you think’?

I wanted to watch this one because I’ve already dealt with the topic of sugar on my blog (Our sweet consolation or devil’s candy?).  Apart from that it rang a bell: the description reminded me another documentary, namely Morgan Spurlock’s “Super Size Me”. I soon found out that Damon Gameau follows Mr. Spurlock’s playbook almost page for page. He decided to consume typical Australian’s 40 teaspoons of sugar every day while maintaining his exercise routine and the same calories intake. Like “Super Size Me,” he keeps a team of doctors and nutritionists handy and checks the health effects of high sugar diet every two weeks or so. What’s different? While Spurlock knew very well that McDonald’s food is unhealthy Gameau eats things that often enjoy a positive image of ‘healthy food’, like cereal, fruit smoothies, muesli bars and low-fat yoghurt; the kind of products that in tv ads are praised as tasty but definitely good for your health.

It soon becomes evident that his body is changing in an alarming way. Within three weeks, he starts to develop fatty liver disease, and by the end incurs early Type 2 diabetes and increased heart-disease risks. Isn’t it scary: two months of ‘sugar life’ gave him 10cm of visceral fat around his waist, some serious mood swings, short attention span, even cognition problems. He was constantly tired, with very short moments of quite manic activity (guess when).

Mind you the experiment was shot in a very light, amusing style, lathered with flashy, special-effects which might appeal to younger audience. Digitally animated segments see Gameau climb inside his own liver and brain (up a rope and into his own nostril, no less) to illustrate the effect sugar has on your body.  Footage of experts is playfully integrated with food packaging so a doctor seems to be speaking from inside a label on a yoghurt cup or a carton of milk.; still don’t get fooled by the antics of Mr. Gameau, added by cameo appearances of Stephen Fry and Hugh Jackman. The movie is a horror pure and simple even if it might be shot in the Willy Wonka Chocolate factory. It shows real tragedies like that of a teenage boy from Kentucky who, after years and years of drinking 6-7 cans of Mountain Dew every day, has to have 60% of his teeth extracted because they are rotten to the core. Or the tragedy of the whole Aboriginal community where people die before they reach 40 due to diabetes and other related illnesses because they are addicted to coca-cola.

A very provocative document illustrating the evils of a diet with high intake of refined sugar. The information wasn’t exactly new to me but I admit it was presented in a very fresh, amusing form. And, more importantly, it touched a subject which should interest everybody who has ever gone shopping.

9 Responses to That Sugar Film (2014) directed by Damon Gameau