Posted on November 11, 2016 by portiabridget

I’ve been sent a complimentary copy of this ARC by the author in exchange for an honest review – thank you very much!

Charlie ‘Big Bad’ Woolf thought it would be easy money, and there’s precious little of that for a private detective in a seaside town. It was just a trip up to London to hand over an 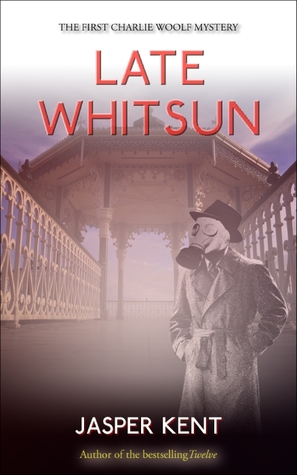 envelope – a favour for his old partner, Alan O’Connor. But Woolf couldn’t resist taking a peek inside.

The pictures were unadulterated smut; a man and a girl in a hotel room. Blackmail, pure and simple – right up O’Connor’s street. Woolf was happy to be rid of them, handing them over to a masked man in a London park.

When he gets home, O’Connor’s waiting for him, which is a surprise. The bigger surprise is that he’s dead; a bullet through the eye. Woolf is the prime suspect, but when he discovers that the man in the photographs is a German diplomat and the blackmail is being run by MI5, things get more complicated.

It seems obvious who killed O’Connor, but Woolf soon realizes that he’s the only one who cares. With war looming, the good of the country counts for more than the arrest of a murderer. If he’s to see the killer caught, Charlie Woolf must prove that the crime has little to do with the world of espionage …

This is the first of installment of a series featuring  private detective Charlie Woolf. The book was very skillfully written and really quick to read. The plot was carefully planned, the narration was captivating and I liked the atmosphere of pre-war England. I didn’t guess the main culprit either so no complaints in this area.

Characterization is another story. Charlie Woolf, an accidental detective, was, in my humble opinion too milquetoast. I enjoyed the fact that his main occupation and skill was art, I liked his inquisitiveness but I missed some passion and a stronger motivation for his deeds.

At the very beginning (and let me tell you it was a terrific beginning, one I liked very much) there was one scene which emphasized the main flaw of the hero – a strange lack of spine I couldn’t get to terms with. Imagine such a thing: Charlie is painting a ten-minute portrait on the pier. He had to use all his charm and people skills to get the commission at all, the competition between pier artists is fierce. All of a sudden his ex-colleague, Alan O’Connor, is showing up and spoiling it all for him with his rude remarks concerning the painted girl. Charlie is angry – anybody would be- he’s just lost one of his customers and additionally was slapped on the face by the angry model. What does he do? He goes with O’Connor for a drink…

Well, perhaps it’s only me but if I were on his place I would swear like a sailor, ask the old man for refund and slap him for a good measure so he never ever dares repeat that trick again.

Unfortunately the main lead continued in similar vein – never engaging properly, never showing more emotions than it suited an English gent, never acting like a young man and a real human being. Perhaps it fitted the scenery of pre-war England but it hardly fitted me. After a while I was wondering why Charlie had engaged in a dangerous and difficult investigation concerning the death of the aforementioned O’Connor at all. In my opinion he simply lacked motivation because he hardly cared about anyone and anything, with the possible exception of smut. ;p

Still the ending made the whole novel worth my while – I liked the twist and the identity of the baddie and I liked the surprise.

A nice beginning of a series  but I do hope the main lead will become a more interesting creature in next installments – I mean him finding more spine and behaving in a more passionate way.

Other novels by Jasper Kent reviewed on this blog: