Posted on December 2, 2016 by portiabridget

Yoon Ji-wook (Cha Seung-won) is a hard-as-nails homicide detective known for his ability to nab violent criminals using their own harsh methods. He is revered as a legend in the police force 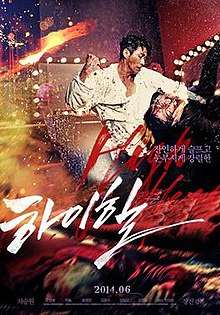 and at the same time feared among the mafia – so far so good. Still one day he hands in his notice. Why?

Since his teenage years Yoon has had one secret wish – to become a woman. Now he is closer than ever to make it come true. However, his many enemies think his career change is also a perfect opportunity to pay him back in kind. When some of his close friends get murdered and Jang-mi (Esom), a girl whose brother Yoon loved at school, is kidnapped he realizes that he can’t stand idly by and follow his dream any longer. How much the revenge will cost him?

The premise of this one proved to be irresistible to me. Imagine that super-macho police officer who can defeat a room full of mafia hit men using just his feet and fists. Ok, also some chopsticks. And a knife. And a punch bowl. Anyway you get the idea. He is so strong, poised and skilled, a role model for every gung-ho male, but deep down he dreams of becoming somebody else. A woman to be precise. Nah, not even that – a sophisticated lady. He owns a wardrobe full of elegant women’s clothing, underwear included, and he bemoans the state of his nails. He loves jewellery. He has weekly estrogen injections in a private clinic and visits special clubs to learn how women move and behave. Irresistible, don’t you think? Add to that those fighting scenes – really brutal and bloody- which prove that our hero, transgender or not, is definitely not a pansy.

The film was described as ‘noir’ but some sequences were incredibly funny, that’s why I categorized it as comedy drama and action thriller as well. Still I felt the narration wasn’t as skillfully done as it should have been – in other words the movie was too long (it lasted close to two hours twenty minutes). Perhaps my European attention span is shorter than the attention span of the Asians or perhaps the director overindulged in those slow-motion, zen-meditation silent scenes and dialogues with several-second lag between one phrase and the other.  There were other problems as well. From time to time I kept wondering why all those mafia men were so firearms-shy, especially facing a cop who was also a known martial arts master. Using a machine gun would be a common sense solution. Oh well. The ending touched reality – always a plus.

A movie with an interesting premise but too long and too slow in some places; still something I would recommend for fans of Asian cinema – watch it if you can borrow it online.