Posted on December 9, 2016 by portiabridget 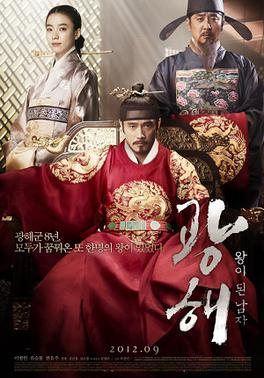 It is a historical movie about missing 15 days in annals of the Joseon Dynasty during the reign of Gwanghae (Lee Byung-hun), the 15th Joseon king.

He was a confusing and conspiratorial ruler who, afraid of assassination, ordered his chief advisor and secretary of defense, Heo Gyun (Ryu Seung-ryong), to find him a double. Heo Gyun found Ha-sun, a lowly acrobat and bawdy joker who looked remarkably like the king. For a significant fee Ha-sun agreed to visit the palace in the evenings and pretend to be the ruler.

One day,  just as he feared, Gwanghae is poisoned with poppy milk and left unconscious. In order to keep the law and order in the country Heo Gyun proposes Ha-sun fill the role as the king until Gwang-hae recovers. Heo  grooms Ha-sun to look and act according to his new station and the man proves to be quick study. During his first official appearance Ha-sun begins to ponder the intricacies of the problems debated in his court. As you can guess, not everything is nice and lovely in the beautiful Korea so the joker-turned-king tries to improve the state of his country. Will he succeed?

I do love historical movies from Asiatic countries because they show bits and pieces of history we, Europeans, usually know nothing about. Apart from that the premise of this one sounded too good to be missed, like a mix of a fairy tale and political satire. Imagine that a lowly commoner, a jester from a bawdy house, is turned into a king and proves to be a far better ruler than the king himself – really, you don’t need a better argument that monarchy is, more or less, pointless! The simple man (but with heart in the right place) wins over the chief eunuch, the secretary of defence and his personal bodyguard in no time. What’s more, the ‘new’ version of Gwanghae  is able to woo back the queen in just 15 days!

The lead actor, Lee Byung-hun, did a great job, playing both, the ruthless king and his confused double, hopelessly lost when facing intricate palace life and etiquette; sometimes he was so funny I laughed aloud! I also enjoyed splendid decorations and fantastic costumes of all actors and actresses (but it was a tad strange that the king wore the same scarlet-and-gold robe for fifteen days. I don’t deny it, it was a splendid piece of garment with embroidered golden dragons but still…wasn’t he supposed to change every now and then?).

Still…the subtle stench of  propaganda permeating some scenes was really a huge drawback. I do hope one day the Koreans do themselves a favour and shoot a historical movie without that heavy-handed patriotic bull***t. Your history, people, is worth it.

A charming version of the Prince and the Pauper tale based on real events from Korean history. If you think that Asian movies, historical or otherwise, have to centre around martial arts, watch this one – even if flawed it is completely recommendable. I think it is also an interesting option for Yule season if you want to avoid Christmas-themed comedies.