I would like to thank dearest Melfka who told me about this film – you rock!

Split between the parallel realities of contemporary London and the otherworldly 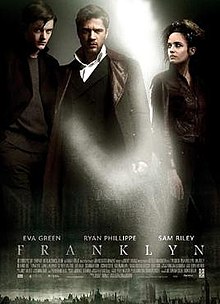 metropolis of Meanwhile City, Franklyn follows the tales of four characters. Jonathan Preest (Ryan Phillippe) is a masked vigilante who will not rest until he finds his nemesis: “the Individual”. Emilia (Eva Green) is a troubled young art student whose rebellion may turn out to be deadly. Milo (Sam Riley) is a heartbroken twenty something recovering from an altar jilt and yearning for the purity of first love. Peter (Bernard Hill) is a man steeped in religion, searching desperately for his missing son amongst London’s homeless.

It was an admirably non-formulaic drama with some interesting, original characters, not easy to classify. An artist who looks for love and acceptance by staging her own suicides every month. A young man ditched at the altar by his bride-to-be. A concerned father looking for his criminal son who has gone missing. Add to that a world straight from your Gothic fantasy, a visual treat if I ever saw one. What’s more the director was brave enough to tackle a very touchy and weighty topic of religion and he did it in an intelligent way. If there were Oscars for ambition and imagination this movie would get one, no problem.

So…the best movie I’ve ever watched? Not really. The attempts to compress so many themes into such a short space of time backfired and after a while the film became just a beautiful mess. There are fragments which dragged and dragged forever. There were jumps in narration which I didn’t understand at first. It was obvious McMorrow wanted his movie to be important – the comment on religious dogmatism, the traumas of war, love and destiny were really enticing. Still, at 97 minutes, these topics were never explored as they should (and small wonder, you can basically shoot a new movie using every single one of them). When it quickly emerges that several characters are insane, figuring out the story’s mysteries becomes a simple task and my enjoyment ended.

An interesting movie, despite its shortcomings. Borrow it if you like Gothic scenery and a bit of psychology with your mysteries.

This entry was posted in dark fantasy, drama, movie review, psychological and tagged franklyn, gerald mcmorrow, insanity, London, love, movie review, religion, revenge, too much of everything. Bookmark the permalink.