A cliffhanger is a type of narrative or a plot device in which the end is curiously abrupt without offering any resolution of conflicts. Usually it involves leaving the main character(s) in a difficult or dangerous situation. As a result suspense is created at the very end of the novel, leaving the readers in such a state that they could not help but to ask, “What will happen next?” This type of end is common to the serially published novels and TV serials.

Cliffhanger plot device shouldn’t be mixed with an ambiguous or open ending, when the reader is left to decide what’s happened next for artistic reasons or with a dangling plot lines ending that ties up the majority of the story or the main conflict but leaves some things unresolved so the reader/viewer knows that the story will be continued but, e.g. with another set of main leads.

Origin and all the rest

In 1930s episodes of early film serials often ended with characters in desperate situations such as hanging literally off the edge of a cliff. Still that plot device is much older; actually it has roots in ancient oriental literature. In the collection of stories known as “One Thousand and One Nights” the king Shehreyar, disillusioned by an unfaithful woman, ordered that every virgin girl he married should be hanged after their first night together. The clever Scheherazade devised a plan to end that slaughter of innocent spouses. She married the king and told him a story  every night which ending would be left unresolved. It worked like a wonder: Shehreyar postponed the order of execution every morning, anxious to hear the rest of the story. That situation lasted 1001 nights so about three years before Scheherazade managed to persuade the king that not every woman was stupid and/or unfaithful and she was a wife worth keeping. Why she didn’t organize a coup d’etat in that time and became an independent ruler instead of that revengeful idiot is beyond me. Oh wait, I know. She was permanently sleep-deprived, poor thing.

Still you must agree such a situation is rather exceptional – I mean rarely authors, directors and writers face such an alternative. Usually they just want you to buy another part of the series, watch the next episode of a serial or return to the next act of a play. Neither William Shakespeare nor Thomas Hardy were above such tricks knowing pretty well that most people are curious creatures and they would spend and spend in order to satiate once aroused curiosity.

Personally I consider a cliffhanger a mean, cheap and rather desperate way to ensure your next piece of fiction will sell. I hate them with few exceptions. Why? First of all I find it extremely annoying – I haven’t been reading a book, spending a considerable amount of time among its heroes and heroines, only to find more questions than answers at the very end of it. It’s unfair. In my view it’s also bit like an extortion. An author says: ‘I know you’re curious but I won’t tell you this or that if you don’t pay me more’. Dear authors,  I appreciate a satisfying resolution. If your prose/series is good I will buy another part without such ham-handed ‘encouragement’. On the other hand if it is bad, nothing will force me to invest more money in it even if you leave all your characters suspended from different roofs and cliffs. 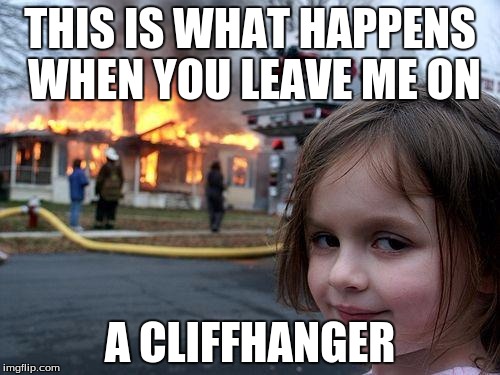 An even more vicious form of cliffhangers is sometimes featured in romance series when the author makes you guess for several installments who the main character will end up with. And then they usually end up with the wrong kind of dude/gal leaving me completely disgruntled. What about you? Do cliffhangers ruin a story for you or you don’t mind them at all? Does it bother you to know that you’ll be left guessing at the end of a novel for some time, sometimes as long as a year or even several years? Have you ever bought another part of a series just because the previous one ended with a cliffhanger and you were curious what would happen next? Were you happy with the answer/solution or were you rather disappointed?

This entry was posted in literature theory and tagged cliffhanger, literature essay. Bookmark the permalink.

9 Responses to Cliffhangers – a dilemma