Geneticists Clive Nicoli (Adrien Brody) and Elsa Kast (Sarah Polley) are young, successful scientists who specialize in creating hybrids of living species. When they propose the use of human DNA, their pharmaceutical company bosses forbid it, forcing them to conduct experiments in secret. The result is Dren, a creature with amazing intelligence and physical attributes. At first, Dren exceeds their wildest dreams, but as she begins to grow at an accelerated rate, she threatens to become their worst nightmare. 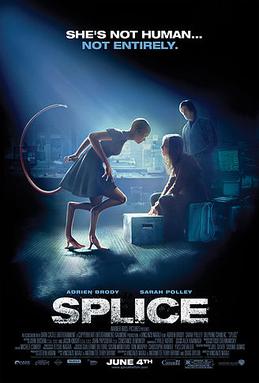 A pair of most childish scientists ever are creating something forbidden in a biotech company lab directed by the most lax  managers and with the worst security on Earth. It would be actually funny if it wasn’t so pathetic. Do they think about consequences of their deeds? Of course not, they’re like overgrown children, right? Their efforts, which are nothing more than glamorized supervision of computer processes any teenage biology nerd could have  performed, are crowned with a creature which would make Frankenstein proud. Dren.

She is a demi-human crossbreed who soon makes lives of Clive and Elsa very complicated indeed. Because, surprise, surprise, they hadn’t thought the whole experiment through. They had’t even planned their next step or two, like preparing the right environment for quickly growing Dren outside the lab. Don’t forget that it was an illegal experiment from the very beginning and our pair of geniuses didn’t even ask themselves what would they do with the new creature, where would it sleep and exercise. Honestly, a good pet owner does far more homework before acquiring a new dog or cat than those two.

As a result Dren lands in an isolated, decrepit farm, almost all on her own (it’s a female until it isn’t, one of few good twists) and, of course, she is hardly impressed. Her two creators soon are losing the last vestiges of control, bickering among themselves bitterly who is to blame for that situation. One blunder is chasing another up to a tragic (but predictable) finale. At that point I was already royally bored and rather disgruntled.

I grant it: the premise was terrific and the actors did what they could to make it float. Still,  I personally found the movie disappointing. I feel all those good ideas and valid questions concerning such sticky issues like bioethics, abortion, corporate-sponsored science weren’t taken as far as they should. Meh.