A tale of art, beauty, lust, greed, deception and retribution — set in a refined society ablaze with tulip fever. 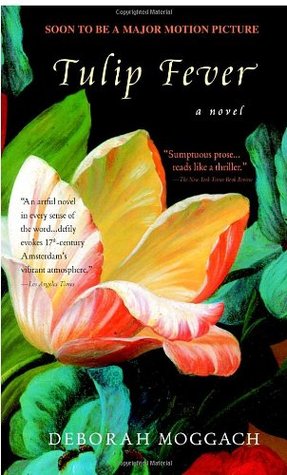 In 1630s Amsterdam, tulipomania has seized the populace. Everywhere men are seduced by the fantastic exotic flower. But for wealthy merchant Cornelis Sandvoort, it is his young and beautiful wife, Sophia, who stirs his soul. She is the prize he desires, the woman he hopes will bring him the joy that not even his considerable fortune can buy.

Cornelis yearns for an heir, but so far he and Sophia have failed to produce one. In a bid for immortality, he commissions a portrait of them both by the talented young painter Jan van Loos. But as Van Loos begins to capture Sophia’s likeness on canvas, a slow passion begins to burn between the beautiful young wife and the talented artist.

As the portrait unfolds, so a slow dance is begun among the household’s inhabitants. Ambitions, desires, and dreams breed a grand deception–and as the lies multiply, events move toward a thrilling and tragic climax.

There are bad books and bad books. The former ones are more or less redeemable; after all they’ve made you laugh once or twice, taught you something new or entertained you a bit. The latter cannot be forgiven. They failed in every respect even if they had promised you quite a lot. Unfortunately this book belongs to that second category. Why? Let me explain.

First of all, it is not a historical fiction novel. The 17th century Holland and the famous tulip speculation bubble appear only in a very distant background and are about as real as decorations in kids’ theatre. The same concern Flemish art and, more precisely, paintings by Jan van Loos (probably modelled after Jacob van Loo but who can be sure?). These are just props, unconvincing and completely unsatisfactory.

What is left? In short a bad romance – bad as in ‘stupid’ and ‘artificial’.

A girl meets a boy. The girl is, unfortunately, married and the boy is employed by her elderly, rich husband to paint the portrait of the ‘happy’ couple. Contrary to the blurb description, the boy and the girl fall in love INSTANTLY, like the very moment they see each other for the first time. You know I hate insta-love with a passion, right? Ok, glad to straighten it up, thank you very much for

A lady with naked tits…er…scratch that. Ariadne by Jacob van Loo. Courtesy of Wikipedia

your patience. Here, have a little pic of a

woman with naked breasts. A painting by Jacob van Loo of course so perfectly legit. She is ‘Ariadne’ if anybody asks.

Let’s return to the plot. The hubby is so stupid, naive, and unobservant that he knows nothing, nothing at all till it is way too late. How come such a slowpoke managed a lifelong, successful career as a Dutch merchant? I think it’s possible only in bad books. No matter; he plays with his beloved tulips and, meanwhile, his nubile wife is plotting with her artist boyfriend how to get rid of poor, old Cornelis. And she immediately proves that, when it comes to brains, she matches her husband to the dot.

Jan and Sophia botch things  royally up by dabbling in tulip speculations (like every nitwit they find out that they need tons of money for their ‘clever’ little scheme) and sheltering Sophia’s pregnant servant, Maria, who has found out about them pretty soon and blackmailed her lady into helping her. Then, after several chapters of idiotic shenanigans, including but not limited to pretending she is giving birth to a child, Sophia decides to fake her own death and disappear, escaping both her husband and her lover. Wait, wasn’t she supposed to be so terribly in love with Johannes that she was simply sick? Wasn’t she supposed to escape with him to exotic, warm places with coconut water and sugar cane? She was, and yet… yeah, it is exactly that type of novel. It ends in a truly spectacular manner: Jan van Loos remains alone for the rest of his life, moping around poor thing, while his lovely Sophia, a Catholic, most likely has taken a veil. Why? Because the book had to end on a tragic note. HAD to.

The Girl with a Pearl Earring by Tracy Chevalier seems to be a masterpiece when compared to this one. Not for me. I only hope the movie is going to be better. Meh.

This entry was posted in book review, chicklit, historically-flavoured and tagged a stupid hero, a stupid heroine, bad romance, boring, deborah moggach, meh, not for me, not impressed, tulip fever. Bookmark the permalink.