The Copper Promise (The Copper Cat 01) by Jen Williams

I got this one from beautiful and clever Melfka – thank you!

Some say the mages left their most dangerous secrets hidden there; others, that great 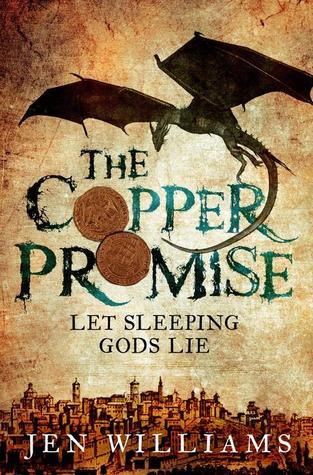 riches are hidden there; even that gods have been imprisoned in its darkest depths.

For Lord Frith, the caverns hold the key to his vengeance. Against all the odds, he has survived torture and lived to see his home and his family taken from him … and now someone is going to pay. For Wydrin of Crosshaven and her faithful companion, Sir Sebastian Caverson, a quest to the Citadel looks like just another job. There’s the promise of gold and adventure. Who knows, they might even have a decent tale or two once they’re done.

But sometimes there is truth in rumour.

Soon this reckless trio will be the last line of defence against a hungry, restless terror that wants to tear the world apart. And they’re not even getting paid.

Perhaps it’s only me but, despite a lot of potential in the blurb, this one left me completely disengaged. I cared neither for any of the characters nor for the plot, I could skip entire chapters without feeling I was missing something important. I got bored for the first time after merely 50 pages, imagine that. The plot seemed just washed-out repetition of so many other high fantasy novels. The magic didn’t leave me awed and anxious for more. The blue dragoness I noticed but only as an afterthought because she was kept in the background.

Maybe it was about the characterization, very schematic, barely there, a feature which could have been ripped from a D&D campaign module. Wydrin, the Copper Cat, had neither her own agenda nor many distinctive traits apart from her ginger colouring and a moniker. Sebastian, a valiant knight by her side, seemed blander than stones of the Citadel he was breaking into. Aaron, lord Firth, apart from his prematurely white mane of hair was just another wronged aristo looking for justice and revenge. Boring like hell.

A DNF and a major meh. Felt like an homage to every hacky-slashy dungeon crawler RPG I’ve ever heard about. I won’t continue the series for sure.

This entry was posted in adventure, book review, fantasy and tagged a hero too stupid to live, a stupid heroine, boring, D & D flavoured, jen williams, meh, not for me, RPG flavoured, series alert, the copper promise. Bookmark the permalink.