This post-apocalyptic sci-fi thriller is set in an alternate world, ravaged by centuries of war between men and vampires. Men won or so they are said by Church officials. The story revolves around a legendary Warrior Priest (Paul Bettany). He was the hero of the last Vampire War but now, like his comrades, lives in obscurity among other humans, doing manual labour in walled-in cities ruled by the Church. 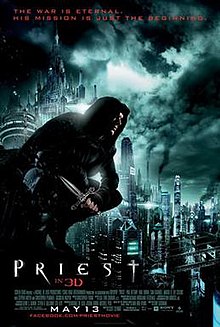 Anyway, when Priest’s niece, Lucy (Lily Collins), is abducted by a murderous pack of vampires the Church don’t want to help because they claimed the vampires have been completely destroyed. Desperate Priest breaks his sacred vows to venture out on a quest to find the girl before she is turned into a vamp slave. He is joined on his crusade by his niece’s boyfriend, a trigger-fingered young wasteland sheriff, and a former Warrior Priestess who possesses otherworldly fighting skills. There will be blood.

Not bad for a cartoon-based vampire movie but it could have been much better. I would recommend it for those who have enough of sparkly vamps or for fans of Paul Bettany. Watch at home, preferably after dark.