Posted on February 2, 2018 by portiabridget

Victorian London is gripped with fear as a serial killer is on the loose; he is leaving cryptic messages written in the blood of his victims and horribly mangled bodies. With few leads 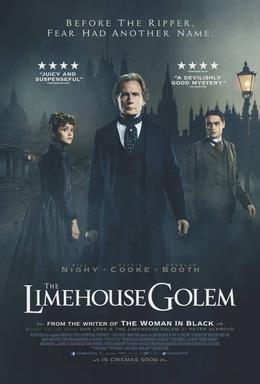 and increasing public pressure, Scotland Yard assigns the case to Inspector Kildare (Bill Nighy), a seasoned detective who has a sneaking suspicion that he’s being set up to fail. Faced with a long list of suspects, Kildare must rely on help from a witness to stop the murders and bring the maniac to justice. Still will he be able to believe an actress who is accused of poisoning her own husband?

I didn’t expect anything from that one but it was definitely a good movie – atmospheric, difficult to categorize, with a bunch of original characters. A  rumored-to-be gay sleuth, Lizzy Cree, (Olivia Cooke) an actress who has been accused of poisoning her playwright husband and her only friend, another actor who has become also a theatre owner after the suspicious death of his uncle. Among the suspects you can find even Carl Marx (Henry Goodman) – yes, that Carl Marx, the founding father of communism. Still. If only the characterization was a tad deeper. If only the main protagonists revealed a bit more emotions and their motivations during the investigation. The mystery driving the plot forward relied heavily on misdirection. And was very easy to solve. It was enough to select one major character the director wants you to trust and root for. Sherlock Holmes would laugh out loud.

Watch this one for great atmosphere of pre-Jack-the-Ripper London and original characters but don’t think too much about the crime mystery – maybe you’ll be surprised at the end. To borrow.