In order to celebrate St Patrick’s Day I am going to dissect a bit ‘Siúil a Rún’, a traditional Irish song and one of my folk favourites. There will be blood! 🙂

The title translates to “go, my love” (or ‘walk my love’): siúil is an imperative, literally translating to “walk!”, a rún is a term of endearment. Here goes the first verse.

I wish I was on yonder hill
Tis there I’d sit and cry my fill
Till every tear would turn a mill
Is go dte tu mo mhuirnin slan. (translation: And may you go safely, my darling)

I think the first thing that sticks out about the song that it has mixed English language and Gaelic verses and an Irish language chorus. It is a style known as macaronic, characteristic for 19 century Ireland, in times when English was becoming a predominant language and Gaelic was being used less and less. It also indicates that this song might be younger than its content seems to suggest.

I didn’t manage to find out what hill (if any in particular) the narrator wishes to visit. Is it perhaps the Hill of Tara, the place of a famous battle between British forces and Irish rebels on 26 May 1798? If so, heavy crying would suit it perfectly – the Irish lost. Or is it simply an unknown hill where she used to date her beloved? Who knows? Anyway the woman sounds mighty depressed to me. Now let’s tackle the Gaelic chorus:

English translation of the chorus (preserving the accent and rhymes):

Come, come, come, O love/Quickly come to me, softly move/Come to the door, and away we’ll flee/And safe for aye may my darling be!

Though many period Irish people were multi-lingual, I would find it exceptional for a folk song that would require a bilingual audience to be properly understood.  (There are plenty of period written pieces that do just that, usually French/English/Latin/etc., but it’s not consistent with a “folk” song.)  The origins of ‘Siuil a ruin’ are unknown and it doesn’t make it easier to speculate about the reasons behind these strange, mixed lyrics. Was it a nod toward the occupants to make your plight more understood and their approach more sympathetic? A bit of politics in pretty disguise? Who knows?

Let’s return to our heroine. She pronounces herself willing to virtually go broke in order to support her beloved and his new career. Why? The explanation is hardly simple so it will take a while, bear with  me. We must go back in time to the second half of the 17th century. In 1688, James Stuart II, Catholic and king of England, Scotland and Ireland, and his Queen Mary had a son. Until then the throne would be granted to their daughter Mary, a good Protestant,  married to the Dutch prince William from the House of Orange, also a Protestant. Now there was a very real possibility of creating a Catholic dynasty in England and return to the old religion. For some people it sounded like a recipe for a disaster.

The Protestants reacted. William mobilized the Dutch troops, invaded England and started the Glorious Revolution. The Stuarts left the country, and William and Mary were assigned as new rulers. Still James didn’t want to give up so easily. From his exile in the Catholic portion of Ireland he organized an army (whose members were called Jacobites, or the restorers of “Jacobus”, the latin form of English ‘James’) and started a revolt to what was perceived from their perspective as a coup d’etat . James was again defeated by troops led by William himself and fled to France. His defeat triggered  the departure of the rest of Irish Jacobite army under the command of Patrick Sarsfield from Ireland to France, as agreed in the Treaty of Limerick on 3 October 1691. It was known as the Flight of the Wild Geese. An incredibly poetic name for something ruinous and sad.

Sarsfield sailed to France on 22 December 1691, leading as many as 14,000 of his countrymen, around 10 000 countrywomen, and children to enter the French service in the first phase of the military denuding of Ireland. The new authorities saw this as preferable to the potentially disruptive effects of having large numbers of unemployed young men of military age roaming the country. Men who could be armed and knew how to fight. The English were wrong but how wrong exactly they found out only during the Jacobite rising of 1745 in Scotland – guess what part of the conflict the Irish soldiers sided with. After that point the recruitment for foreign armies in Ireland was officially banned, unofficially limited to a trickle of Irish volunteers who were able to make their own way to France. And, as this song claims, such an illegal endeavour was pretty costly.

A replica of an 18th century dress with a red petticoat.

I’ll dye my petticoats, I’ll dye them red
and it’s round the World I will beg for bread
until my parents would wish me dead.
Is go dte tu mo mhuirnin slan

That particular verse started my search and it also proved the most obstinate. I didn’t understand why the woman had to dye her petticoats red at all and why her family might wish her dead as a result. Out of shame? For any other reasons, like wandering aimlessly instead of marrying a good lad and have plenty of kids?

While surfing the Internet and asking Google for answers about the red petticoat I found many contrary explanations. There were suggestions that the girl might be pregnant, or she felt forced to prostitute herself after selling all her most precious belongings (but why she needed to advertize any of these was beyond me). Others thought she might want to join the Travellers (after all the Travellers refer to themselves in Irish as an Lucht Siúil) and go ’round the world’ with them – also a shameful choice. Finally somebody pointed out that ‘red’ rhymes well with ‘dead’ in English. As simple as that. 🙂

I agree that dyed petticoats, red or of any other colour, would make any ‘going round the world and begging’ easier because the fabric wouldn’t show wear and tear so fast as, say, white or light-coloured petticoat. Also red petticoats were favoured by women who had their periods, for obvious reasons. All this so nice and practical, don’t you think? Still I admit that while all of these arguments were interesting I didn’t find them especially helpful.

Irish House of Commons in 1780, by Francis Wheatley. Notice all those red, red jackets and red accents among the public above.

Then I reminded myself of one scene from ‘Gone with the Wind’ (book and movie), when the ever-gallant Rhett Butler offers a red petticoat made of silk to one of Scarlett O’Hara’s faithful slaves, Mammy. The said woman, even if not exactly young and rather a stickler for propriety, was simply thrilled by that fact. Literally tickled pink. I suppose it is a kind of proof that no, red petticoat didn’t have any negative connotations like indicating its wearer was pregnant out of wedlock or a prostitute. It wasn’t  Rhett’s intention to offend Mammy. He wanted to make her a nice gift and he succeeded. As flimsy as that argument might seem, it indicates that working women actually preferred their petticoats to be coloured – for pure convenience- and I must emphasize the fact that a petticoat was completely visible from under the dress in those times.

Then I stumbled on another tidbit. One of the period painters, Francis Wheatley arrived in Dublin at the zenith of the popularity of the Volunteers and quickly assumed the role of unofficial artist of the movement. His paintings document the engagement of women. Apart from his House of Commons painting, shown above, Wheatley’s ‘Volunteer review’ also includes women in the windows overlooking College Green, wearing Volunteer colours, and one woman can just be distinguished dressed in a female version of a Volunteer uniform. These uniforms were red. Bright red.  Still, an appropriate dress or other expensive accessories like hats or scarves were available just for rich and elegant ladies. If a poor girl couldn’t afford it, she might think of home-dyeing her petticoat any shade of red and show her support to the cause in the cheapest possible way. Practical and patriotic – two sparrows killed with one stone. And then she might go a-begging, how droll.

I wish, I wish, I wish in vain,
I wish I had my heart again,
And vainly think I’d not complain,
Is go dte tu mo mhuinin slan.

But now my love had gone to France,
to try his fortune there to advance.
If he e’er come back, ’tis but a chance.
Is go dte tu mo mhuirnin slan

The song ends on a rather sad but realistic note – the girl hasn’t lost all her common sense because she is pretty aware that her beloved might never return and she wishes she was free of her infatuation. Maybe there is some hope for her after all. 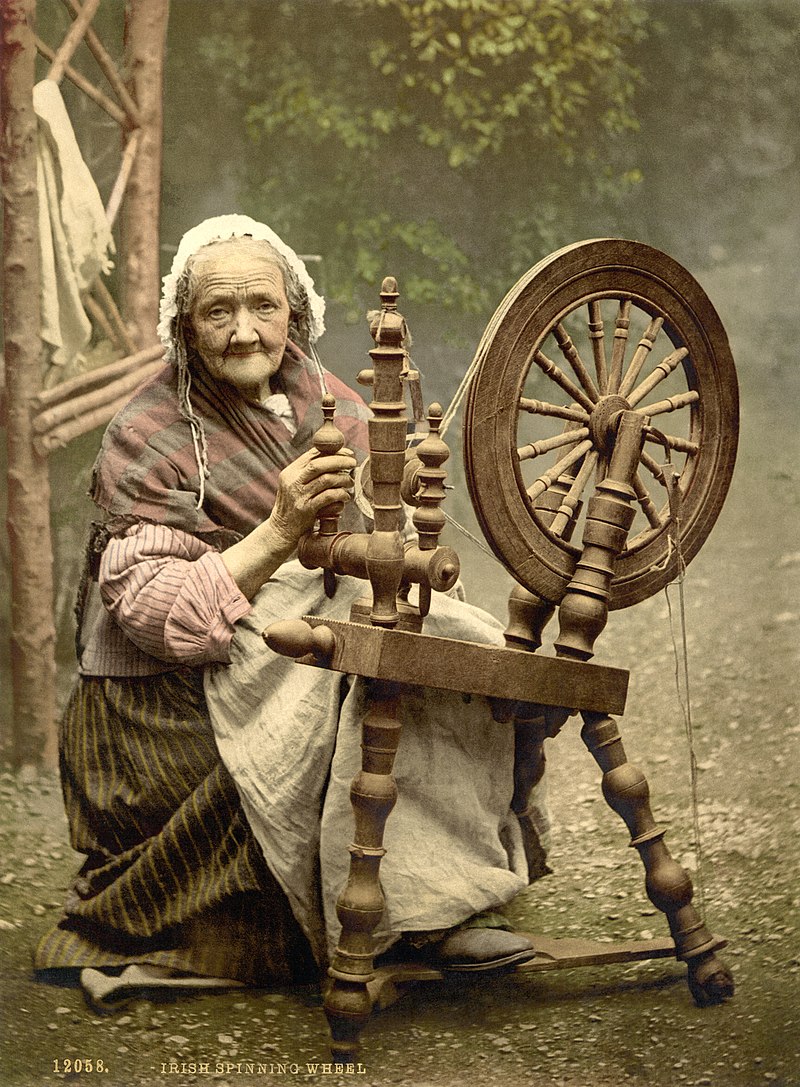 There are many versions of this song available but I based my analysis on the old Clannad rendition. Don’t be surprised if you hear ‘Siuil a ruin’  sung at different pace and with quite different lyrics. Also any mistakes and speculations made in this essay are mine only.