Rhavas was a good, holy, and pious man-and the cousin of the Avtokrator. He would probably have become ecumenical patriarch of the Empire in the capital, Videssos the city . . . if his world had not suddenly and tragically fallen apart when the Empire of Videssos 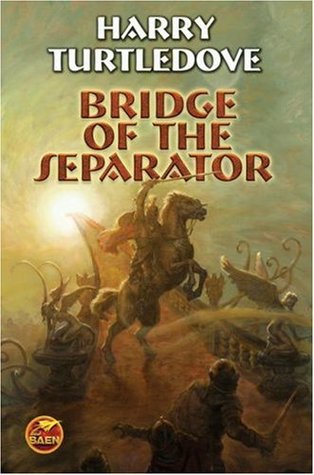 erupted into civil war and the Khamorth barbarians swarm over the borders. As the home he loved was brutally sacked, Rhavas had to flee for his life, then make his way through lands swarming with fierce nomads and with soldiers loyal both to his cousin and to the rebel usurper. He may never see Videssos the city again, let alone preside in its High Temple. He has always followed Phos, the god of light and goodness, Videssos’ god, and despised evil rival Skotos. Those who fall off the Bridge of the Separator during judgment in the afterlife tumble down to Skotes’ ice forevermore. But when evil seems to have swallowed the whole world, what is a cleric who reveres logic as well as goodness supposed to believe? It’s a harder question than Rhavas wishes it were.

A story of a heresiarch would interest me even if it wasn’t set in the fantasy Videssos. The fantastic setting was an additional bonus, although I wish there was more magic available in the plot. Still the main character was one of the most interesting fellows I had a pleasure to meet. A cleric who starts doubting his faith. A deeply honest man who, suddenly, cannot see any sense of honest life anymore. Then, without asking or wishing for it, he is given a very strange gift… a gift from his enemy, Skotos. Rhavas will never  be the same again. Or maybe he is becoming the very person he’s meant to be all along…

Of course the book was not perfect. In fact more than one time I had a strong impression that the novel would profit greatly from a round or two of professional editing. Sometimes the narrative stumbled a bit. Sometimes I felt the worldbuild could have been better. There was definitely too much telling instead of showing. Still I give Mr. Turtledove points for tackling a very difficult topic and a very original character, an anti-hero, nothing less. I despised Rhavas from time to time because, undoubtedly, he committed  many horrible crimes; still I couldn’t help admiring the man when he was defending his version of truth before the whole synod of his former colleagues…

If you like historical fantasy with anti-heroes you might be positively surprised by this one and you’ll love it despite its flaws and violence.

6 Responses to Bridge of Separator (Videssos 12) by Harry Turtledove