Land of the Beautiful Dead by R. Lee Smith

SHE WOULD DARE ANYTHING TO SAVE THE WORLD FROM HIS RULE.

He ascended from the darkness years ago—Azrael the Eternal, Azrael the Undying, Azrael Who Is Death—bringing with him the black rains, the fires, the souring of the sky, and the Eaters. Now he rules in the walled city of Haven with his favored Children and his dead court, while all that is left of the living struggles to survive in the ruins of a world that used to be their own. But even as extinction looms, humanity will never surrender to their monstrous conqueror. 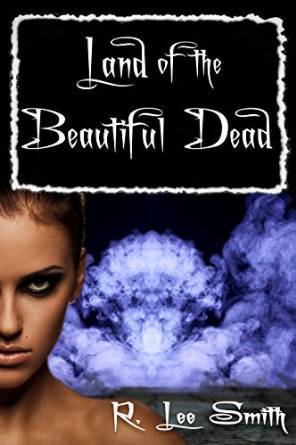 For Lan, this brutal life has been the only one she’s ever known, but she still believes it can change. If the war can never truly end until the Eaters are ended, she will go to Haven, to Azrael himself, and demand he end them. To her surprise, she does not immediately die the hero’s death she expected. Instead, Azrael offers her a chance to convince him, and all she has to do is submit herself to the chill embrace of the lord of the Land of the Beautiful Dead.

Usually I am pretty tolerant when it comes to R. Lee Smith’s books. I know what to expect. They are long, they are hard to categorize, they feature monsters which usually have sex with human women, and their heroines, more often than not, make me annoyed. Still I admit this time my tolerance was sorely tested. Overall I feel Smith’s latest work just isn’t up to par with the previous ones. Mind you the previous books were hardly perfect.

The book plot in a nutshell would go like this: an illiterate girl with average looks throws herself at Azrael, the Lord of Life and Death, the bane of humanity, an ancient alien being. Woo-hoo! Then the author wants me to believe that they fell in love because Azrael could give Lan super orgasm and Lan could return the favour plus treated him like any other human male. Oh and they quarreled like almost all the time. Errr… not fun. What’s even worse, His Deadliness spoke to Lan in paragraphs! How can you be menacing, intimidating, scary even, and so long-winded? A quote:

“Am I your lord? I have never been titled by the living. Indeed, when last I spoke with the emissaries of Men, I was told they would never acknowledge nor submit to my right of rule. They were wrong as things turned out. But if the living can bring themselves to at last admit their defeat, I suppose I can be gracious enough to accept their honorifics. Am I now lord over the living as well as the dead? Shall I sent my Revenants to hear the oaths of my full people? Shall they ask a tribute in my name? Or yours?”

Yes, I am pretty aware why I started to read it at all. Three words: Hades and Persephone. It is a very old and very powerful trope I adore. Plus a solid dose of zombies which are more or less ok (meaning I can tolerate them but I’ve never been their big fan). Still I felt all the way that particular execution left a lot to be desired. The narrative style was begging for several editing sessions. Some plot holes were as big as skyscrapers. An idiotic heroine whined and whined and then had the best sex of her life and then she whined some more because she didn’t get EVERYTHING she wanted. And she hated learning and reading. Seriously…

Big, fat disappointment. I almost DNFed this one several times. Still I am stupid and stubborn so enjoy my review. Lowest strata of meh.

ETA: For a reason or two I visited the official website of R. Lee Smith. I found a curious announcement concerning Land of the Beautiful Dead and her next book (Pool) which hasn’t been published yet; I would like to share a short part of it (the rest, rather long and convoluted, is available at her page) :

“So after Land of the Beautiful Dead came out, I was unavoidably exposed to some reviews. And the vast majority were overwhelmingly positive! But. Even in the midst of these otherwise glowing piles of flowery praise, lurked a whiff of criticism I have oft heard before, which I will paraphrase here as along the lines of, “I almost didn’t get this book because the author doesn’t always deliver a Happily Ever After.”

I don’t write Romances. I don’t read Romances.  I don’t understand Romances. I write Horror/Sci-Fi/Fantasy that occasionally crossover into Erotica, but I don’t write Romances, and here’s the thing: The Happily Ever After in a Horror genre, or Sci-Fi or Fantasy or even Erotica, is NOTHING LIKE the Happily Ever After of a Romance. So these readers who have this complaint are 100% correct and 100% entitled to feel/voice their dissatisfaction, and especially 100% right to warn others that my books may not deliver a “good” ending. I would much rather lose potential readers who I know would not be happy reading my books than have them buy it, read it, and hate it.

Those readers are going to hate Pool.

Pool is not a Romance.”

I happen to disagree. HEA wasn’t even a part of my issues and yes, this book was a romance.

Other books by R. Lee Smith reviewed on this blog:

6 Responses to Land of the Beautiful Dead by R. Lee Smith