Posted on August 3, 2018 by portiabridget

Leonard Pine and Hap Collins are two hit men turned private detectives. When their friend Marvin asks them to look into a cold-case double homicide, they’re more than 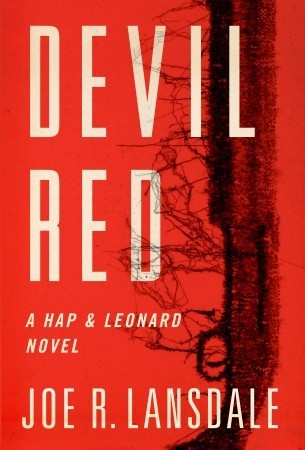 happy: they like trouble, and they especially like getting paid to find it. It turns out that both of the victims were set to inherit serious money, and one of them ran with a vampire cult. The more closely Hap and Leonard look over the crime-scene photos, the more they see, including the image of a red devil’s head painted on a tree. A little research turns up a slew of murders with that same fiendish signature. And if that’s not enough, Leonard has taken to wearing a deerstalker cap . . . Will this be the case that finally sends Hap over the edge?

I jumped once again right in the middle of a long series (as far as I know there are 12 parts available) and felt immediately at home. Hap and Leonard had a goofy sense of humour – I guess that’s why it was so easy. It seems Lansdale’s formula of writing a whodunit goes as follows: you need one middle-aged redneck, one mouthy gay black best friend of the said redneck, both with an unerring instinct for irritating the living hell out of dangerous people, you add plenty of shooting and blood plus some vampire wannabes. Easy peasy.

I was progressing nicely and after the first half of the book I was thinking mainly positive thoughts. Unfortunately it didn’t last.  The plot thickened. And thickened some more. I turned one more page and all of a sudden there were too many coincidences, too many murders and too much mayhem. Near the end the book left me exasperated and I wasn’t buying the premise any longer. I don’t want to spoil you so I can’t be very specific; let me just say that one secondary character called Vanilla Ride decided to butt in and solve all the problems. I wasn’t impressed. I like it when main characters solve their problems on their own, deerstalker hat or no deerstalker hat.

For fans of experiencing vicariously wholesale carnage and bloody shooting. I am not sure whether I want to check other parts of this series. Devil Red, even if funny, was quite enough.

This entry was posted in book review, contemporary, crime, whodunnit and tagged devil red, good sense of humour, joe r. lansdale, too much action, too much violence. Bookmark the permalink.