An unspecified English-speaking country in an unspecified future. A police detective called Sal Frieland (Clive Owen) has to find a serial murderer who is also an exceptionally good hacker and, most probably, a woman. She (Amanda Seyfried) can modify memories and 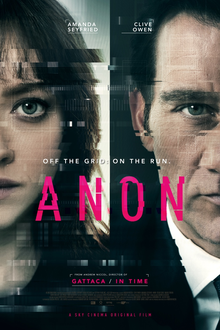 literally make you see things that don’t exist, creating a kind of digital ghosts or hallucinations right in your brain. When something goes bad, she shoots you straight in the head from a very close range.  In a world where everyone leaves digital footprints and people walk around with hologramed data, instantly available, hovering above their heads, she is an error, an anonymous person, a glitch. Is it possible to catch her at all? How come she exists?

What can be more dangerous than a woman who defies a system? Only trying to catch her… The premise really captivated my imagination. Currently ordinary people have just started to understand the real value of personal data; the director transferred us to a reality where 24/7 surveillance is not only acceptable but quite normal and digitalization of, basically, everything, has so many uses. You know everybody you pass on the street. Your mirror might be also your computer screen, tv screen, and a videophone  panel. You don’t have to carry keys around – your car lock and door lock will recognize you instantly and as long as you think the right code it is punched in and accepted. There are drawbacks but who would think about them twice?

Still I feel several humorous scenes would make this movie far more enjoyable. The scenery consisted of just a few cityscapes, usually at night, and a lot of cement gray walls, gray stone pavements, and steel lifts. Even the interiors of private homes looked as if they were designed by a minimalist zen monk who loved just three colours: white, black and sepia. A sense of humour would be like a fern positioned in the crucial spot.  I also wish the director/scriptwriter  at least tried to explain some tricks used to forward the plot, like whether people were born with a digitalized brain and  an Internet connection or just acquired it later (and if yes then how). Also some of the dialogues between the characters who were supposed to be top-notch experts but were just stating the obvious time and again, made me smile ( good but rather unintentional). Oh, and there was a sex scene in which our intrepid heroine wore her bra all the time – self-conscious or a fan of a futuristic kink?

A cheap, bleak, hi-tech cyber-thriller which pretends to be as disturbing as dystopias penned by Philip Dick but is just a poor wannabe cousin, twice-removed.